Kids Encyclopedia Facts
Not to be confused with Montgomery County, Pennsylvania.

Montgomery is a borough in Lycoming County, Pennsylvania, United States. The population was 1,579 at the 2010 census. It is part of the Williamsport, Pennsylvania Metropolitan Statistical Area.

Montgomery was incorporated as a borough by the Pennsylvania General Assembly on March 27, 1887 from part of Clinton Township. The history of the settlement of Montgomery begins in 1783 when John Lawson established a homestead there. Nicholas Shaffer built a gristmill in Montgomery in 1795. A sawmill and a wool carding mill were other early industries found on Black Hole Creek which flows through Montgomery.

P. M. Barber was the first person to come to Montgomery and establish an industry that achieved any sustainable success. He opened a distillery in 1859 and later a planing mill in 1869 on the site of the distillery. Barber with his partners, A.B. Henderson, Jesse Rank, and Nathan Fowler had so much success that they laid out a town around their mill in 1870. The town was further expanded by the success of Montgomery Machine Shops which starting in 1873, under the supervision of Levi Houston, built woodworking machinery that was sold to clients throughout the United States and Canada and as far away as Australia. 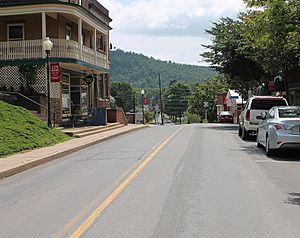 There were 628 households, out of which 39.3% had children under the age of 18 living with them, 54.5% were married couples living together, 15.1% had a female householder with no husband present, and 26.3% were non-families. 20.7% of all households were made up of individuals, and 8.4% had someone living alone who was 65 years of age or older. The average household size was 2.70 and the average family size was 3.12.

All content from Kiddle encyclopedia articles (including the article images and facts) can be freely used under Attribution-ShareAlike license, unless stated otherwise. Cite this article:
Montgomery, Pennsylvania Facts for Kids. Kiddle Encyclopedia.