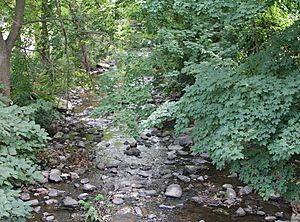 Black Hole Creek is a tributary of the West Branch Susquehanna River near Montgomery, in Lycoming County, Pennsylvania, in the United States. It is approximately 8 miles (13 km) long. The stream contains trout. It also is subject to significant increases in temperature downstream of a pond on the grounds of the Allenwood Federal Prison. However, the temperature decreases again after reaching the pond and is somewhat lower at the mouth, but the water at this point is still warmer than at the headwaters. 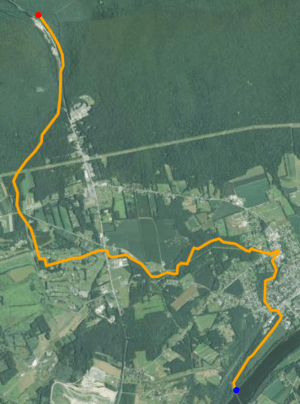 Black Hole Creek has three major tributaries. It also has an additional seven non-permanent tributaries and fifteen ephemeral ones. One of these tributaries is known as Spring Creek.

According to an 1888 magazine article, Black Hole Creek flows from a geological feature then known as the Black Hole.

A total of 18 bridges cross Black Hole Creek. There are also 20 pipes that flow into or run under the creek. The creek has two small dams that are made of rock. There is also an earthen dam on Black Hole Creek near the Allenwood Federal Prison. The presence of this dam raises the water temperature of the creek. A culvert on the prison grounds that is obstructed also contributes to an increase in the water temperature. As of 2003, there are also 15 instances of rip rap and 36 deposition bars. A 2003 study found that there were 98 potential sites for erosion on the creek.

In the 1980s or 1990s, the White Deer Golf Course was expanded. During the expansion, a number of culverts were created, which led to the formation of a pond with brown water. This pond flows into Black Hole Creek. There is also a pond near the Allenwood Federal Prison, which flows into the creek, drastically increasing its water temperature.

The Sheshequin Path once passed near Spring Creek, a tributary of Black Hole Creek. In 1889, Black Hole Creek flooded drastically and unexpectedly, causing significant damage to the Montgomery borough. The creek appeared in a map of the area as early as 1779.

Until 1905, Black Hole Creek was the source of the water supply of the borough of Montgomery.

All content from Kiddle encyclopedia articles (including the article images and facts) can be freely used under Attribution-ShareAlike license, unless stated otherwise. Cite this article:
Black Hole Creek Facts for Kids. Kiddle Encyclopedia.