Muncy Creek (also known as Big Muncy Creek) is a tributary of the West Branch Susquehanna River in Sullivan County and Lycoming County, at Pennsylvania, in the United States. It is approximately 34.5 miles (55.5 km) long. The watershed of the creek has an area of 216 square miles (560 km2). The creek's discharge averages 49 cubic feet per second (1.4 m3/s) at Sonestown, but can be up to a thousand times higher at Muncy. The headwaters of the creek are on the Allegheny Plateau. Rock formations in the watershed include the Chemung Formation and the Catskill Formation.

There are a number of lakes in the watershed of Muncy Creek, including Eagles Mere Lake, Highland Lake, and Beaver Lake. The creek was known as Occohpocheny to Native Americans. The area in its vicinity was settled in 1783. Various other industries and mills were constructed in the creek's vicinity from the late 18th century to the early 20th century. Wild trout naturally reproduce in part of Muncy Creek. Part of the creek is navigable by canoe. 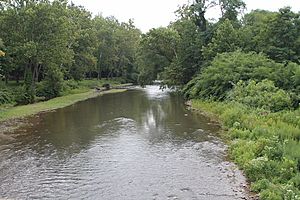 Upon exiting Davidson Township, Sullivan County, Muncy Creek enters Lycoming County and flows along the border between Shrewsbury Township and Penn Township for several miles. It continues following U.S. Route 220 during this time, picking up a few tributaries, including Lick Run. The creek also passes by Glen Mawr and Tivoli during this stretch. Beyond the stretch, in Picture Rocks, the creek crosses Pennsylvania Route 864. Beyond the community, the creek continues south into Wolf Township, leaving its valley passing by the eastern edge of Hughesville. Some distance further on, the creek receives the tributary Sugar Run and some miles later leaves Wolf Township in a southwesterly direction. Upon exiting Wolf Township, the creek enters Muncy Creek Township, where Little Muncy Creek flows into it. Muncy Creek then turns northeast, crossing Pennsylvania Route 405 and turns southwest, crossing Interstate 180. The creek then receives the tributary Wolf Run and immediately afterwards empties into the West Branch Susquehanna River. Muncy Creek joins the West Branch Susquehanna River is 27.88 miles (44.87 km) upstream of its mouth. 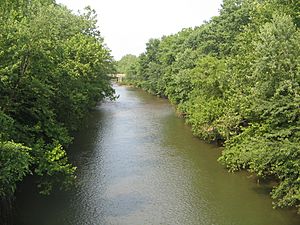 The mouth of Muncy Creek has an elevation of slightly less than 480 feet (150 m), while the source of the creek has an elevation of between 2,260 feet (690 m) and 2,280 feet (690 m). The headwaters of the creek are more than 1,500 feet (460 m) higher than its mouth. The headwaters of Muncy Creek are mountainous and are situated on the Allegheny Plateau. The southern edge of the Allegheny Mountain runs from the creek west as far as Lock Haven or Pine Creek. The valley of Muncy Creek is surrounded by scalloped hills. Muncy Creek's course winds significantly, but flows generally southwest.

A narrow belt of the Chemung Formation occurs along Muncy Creek in Shrewsbury Township, Lycoming County. An outcropping of the Catskill Formation also occurs along parts of the creek in Jordan Township, Lycoming County. The Chemung Formation has an outcropping on the creek near Moreland. This outcropping is 30 feet (9.1 m) high and gray in color. It consists of shale and sandstone. Red shale is also found on the creek. In general, rock formations consisting of sandstone and shale are found along much of the creek, while rock formations of limestone occur close to its mouth.

The Tombs Run and Muncy Creek Anticline runs parallel to the creek through northern Penn Township, Lycoming County and also enters Sullivan County near the creek. The creek also has a cliff known as Picture Rock on it. An area of boulders on the creek forms a Class 2 rapid. There is a levee on Muncy Creek in Hughesville.

The soils in the valley of Muncy Creek are deep but relatively poor. However, farming was done in the valley in the late 1800s and still is as of the late 1900s. The valley has forested hills on either side. The Morris-Oquaga-Wellsboro soil series is found along the creek in Sullivan County.

The channel of Muncy Creek is sinuous with high streambanks and the creek has cobble and gravel bars. There are a few strainers on the creek.

Map of the West Branch Susquehanna River (dark blue) and major streams in Lycoming County, Pennsylvania. Muncy Creek (light blue) is the fifth major creek to enter the river in the county, south of Loyalsock Creek (green). Little Muncy Creek is the shorter branch south of the longer main creek (and is labeled with a '6').

In the late 1800s, the only road in Davidson Township, Sullivan County besides the Susquehanna and Tioga Turnpike passed near Muncy Creek and the settlements along it. The valley of Muncy Creek is largely undeveloped, largely lacking even summer camps.

Muncy Creek derives its name from the Munsee Indians. The name sometimes has been spelled "Muncey Creek".

Historically, railroads ran parallel to Muncy Creek 26 miles (42 km) upstream from its mouth, as far as the community of Nordmont. There were also numerous railroad stations on the creek upstream of the community of Picture Rocks The Reading Railroad also had a bridge over the creek in the past. The creek experienced severe flooding in 1889.

In the early 1900s, many of the sewers in the community of Eagles Mere discharged into tributaries of Muncy Creek, such as Outlet Run. Sewage was also discharged into Muncy Creek in Hugesville. Additionally, in the early 1900s, the waters of Muncy Creek were contaminated with tannery waste products from Muncy Valley and also chemicals. For this reason, the creek was only used for power during this time. Additionally, a methyl alcohol plant, the Nordmont Chemical Works, discharged chemicals into the creek at Nordstown. Other major industries in the watershed in the early part of the 1900s included clay mines and furniture factories.

There are some forested areas in the floodplains of Muncy Creek in the United States Geological Survey quadrangle of Hughesville. The Natural Areas Inventory of Lycoming County recommended retaining the natural vegetation in this area to improve water quality.

It is possible to canoe on Muncy Creek during snowmelts or shortly after heavier rainstorms. Although the creek is used for canoeing by locals, it is less popular for this use than the nearby Loyalsock Creek. Edward Gertler considers the creek to be especially good for novice canoers. He describes Muncy Creek as a "pleasing but generally mediocre mountain stream" in his book Keystone Canoeing. However, it is only possible to canoe on the creek downstream of the plateau of North Mountain. A total of 24.3 miles (39.1 km) of the creek is canoeable. The difficulty rating of Muncy Creek for canoeing ranges from 1+ to 2.

There is a boat ramp belonging to the Pennsylvania Fish and Boat Commission in the lower reaches of Muncy Creek. It can also serve as a take-out for canoers on the creek.

All content from Kiddle encyclopedia articles (including the article images and facts) can be freely used under Attribution-ShareAlike license, unless stated otherwise. Cite this article:
Muncy Creek Facts for Kids. Kiddle Encyclopedia.