Picture Rocks is a borough in Lycoming County, Pennsylvania, United States. The population was 693 at the 2000 census. It is part of the Williamsport, Pennsylvania Metropolitan Statistical Area.

Picture Rocks is the birthplace of Warren Sprout, who won a gold medal at the Olympics.

Picture Rocks was incorporated as a borough on September 27, 1875 from Wolf Township, but its history began a century earlier. The earliest settlers, who arrived in 1773, observed Indian pictographs (no longer extant) in the Muncy Creek valley, and the borough occupies the site of a Munsee Indian village. Evidence of this is found in the arrowheads and other relics that have been found in the vicinity of the creek. 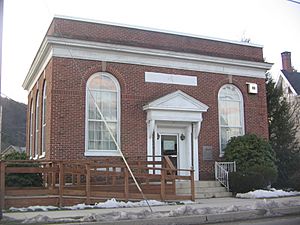 The borough hall in Picture Rocks

The first warrant for property in the Picture Rocks area was issued by the Province of Pennsylvania to Henry Rody on June 3, 1773. The land was used very little and passed through several hands until 1848 when it was sold to A. R. Sprout and Amos Burrows who went on to become the founding fathers of Picture Rocks. Sprout and Burrows worked to clear the land that was thought to be worthless of the rocks, logs and brush that covered it. They also rebuilt an abandoned sawmill and established a factory that manufactured sashes, doors, and window blinds. This factory, the first of its kind in the area, caused a stir among the local carpenters who believed that the ready made building materials would curtail their profitability. The original factory was later used by the Burrows Brothers Furniture Company before becoming the Handle and Excelsior Company. Another factory, located at the present intersection of U.S. Route 220 and Factory Street, manufactured ladders.

The town grew up around the factory and soon other manufacturers arrived to harness the water power provided by Muncy Creek. People interested in purchasing lots in Picture Rocks were required to sign an agreement stating that they would not open a saloon or engage in the trafficking of liquor. This law was made by the residents and founders of the town, a majority of them being Baptists.

The Baptists of Picture Rocks organized in 1840 and met for a while in a school house. A traveling preacher arrived in Picture Rocks one Saturday evening and found the school to be unfit for Sunday gatherings. After preaching on the following morning, he rallied the members of the congregation around the cause of building a proper house of worship. Under the guidance of their new pastor, the members of the Baptist Church built a log church building that was used until its replacement twenty-five years later by a larger facility.

At the time of the borough's creation, Center Street was considered the main street for travelers. The original homes built by the Burrows and Sprout families still exist along Center Street and are easy to identify based upon their square shape with low pitched roof often with a widow's peak or lookout.

Borough resident John Wesley Little achieved regional fame for his watercolor landscapes and images of rural farms and animals. His studio/home is located along Water Street. His original praintings are highly sought after at local auctions.

Located within the East Lycoming School District, Picture Rocks is home to George A. Ferrell Elementary School. This K-6 elementary school is recognized as a National Blue Ribbon School. The school was originally a fully inclusive school for students in first through twelfth grades with its own sports program. The school joined with others in neighboring Hughesville and nearby Lairdsville to form the East Lycoming School District.

According to the United States Census Bureau, the borough has a total area of 0.9 square miles (2.4 km2), all of it land.

There were 274 households, out of which 35.4% had children under the age of 18 living with them, 60.2% were married couples living together, 9.5% had a female householder with no husband present, and 27.4% were non-families. 24.1% of all households were made up of individuals, and 13.9% had someone living alone who was 65 years of age or older. The average household size was 2.53 and the average family size was 2.99.

All content from Kiddle encyclopedia articles (including the article images and facts) can be freely used under Attribution-ShareAlike license, unless stated otherwise. Cite this article:
Picture Rocks, Pennsylvania Facts for Kids. Kiddle Encyclopedia.