Sullivan County is a county located in the U.S. state of Pennsylvania. As of the 2010 census, the population was 6,428, making it the second-least populous county in Pennsylvania. Its county seat is Laporte. The county was created on March 15, 1847, from part of Lycoming County and named for Charles C. Sullivan, leader of the Pennsylvania Senate at that time.

The land which became Sullivan County was originally purchased from the Iroquois by the Province of Pennsylvania in 1768, as part of the first Treaty of Fort Stanwix. It was then part of Northumberland County, then became part of Lycoming County when it was formed in 1795. Sullivan County itself was formed from the northeastern part of Lycoming County on March 15, 1847. It was the thirteenth and last county formed at least partly from Lycoming County (and the fifth entirely formed from it).

According to the official state publication Pennsylvania Local Government, Sullivan County was named for Pennsylvania state senator Charles C. Sullivan, who "took an active part in procuring passage of the bill" establishing the county. However, according to Frederic A. Godcharles (1933), the county is named for General John Sullivan, who led the Sullivan Expedition against the Iroquois in 1779.

Elevation ranges from 2593 ft at North Mountain in Davidson Township to 779 ft on Loyalsock Creek at the Lycoming County line. The county is served by Pennsylvania Route 87, Pennsylvania Route 487, and U.S. Route 220. The major rivers in the county are Loyalsock Creek, Little Loyalsock Creek, Muncy Creek, and Fishing Creek. The majority of the land in Sullivan County is forest, but there is some farmland, especially in the northern part of the county. There are numerous river valleys in the southern and western parts of Sullivan County.

Sullivan County lies predominantly within the Appalachian Plateau physiographic province, which is characterized by gently folded and faulted sedimentary rocks of middle to late Paleozoic age. The southern border of the county is approximately at the Allegheny Front, a geological boundary between the Ridge and Valley province and the plateau. (PA Geologic Survey Map 13). The mountains within the county are part of the Endless Mountains. 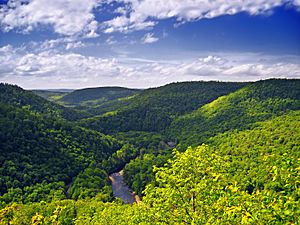 The stratigraphic record of sedimentary rocks within the county spans from the Devonian Lock Haven Formation (exposed only in Lick Creek valley) to the coal-bearing Pennsylvanian Allegheny Formation. Generally, the Catskill Formation underlies most of the lowlands, and sandstones of the Huntley Mountain, Burgoon, Mauch Chunk, or Pottsville Formations cap the mountains. No igneous or metamorphic rocks exist within the county, other than possible glacial erratics.

Structurally, the bedrock of Sullivan County is gently folded, with the axes of two major anticlines (including the Wilmot Anticline) and two major synclines (Bernice-Mehoopany Syncline and Noxen Syncline) each trending roughly east-west. There are three mapped faults in the Allegheny Formation between the towns of Murray and Ringdale.

Nearly all of Sullivan County was glaciated several times in the past, during the Pleistocene epoch, or "Ice Age." (PA Geologic Survey Map 59). Most of the county is covered by glacial till of Late Wisconsinan age. Late Illinoian Stage deposits may underlie the Late Wisconsinan deposits, and these are exposed in the south central part of the county (roughly western Davidson Township).

Several small coal fields exist within Sullivan County. The fields contain either bituminous coal or semi-anthracite, and all occur within Pennsylvanian strata. 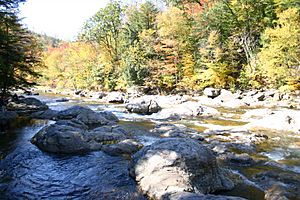 The Haystacks in Loyalsock Creek

Notable geologic features within Sullivan County include some of the following: 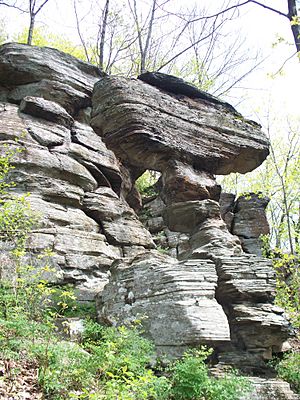 Sullivan County is one of only two counties in Pennsylvania with no known active railroad lines of any kind, the other being Fulton County. 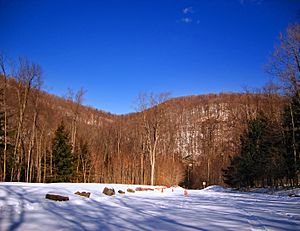 There are two Pennsylvania state parks in Sullivan County.

Sullivan County is also home to a large, private hunting club, Painter Den, Inc. This vast property is situated in Davidson, Laporte and Colley townships. Painter Den pond is also on the property and is stocked with Perch and Pike. 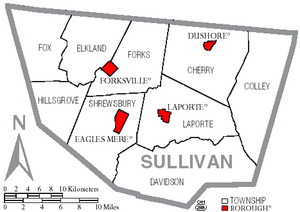 Under Pennsylvania law, there are four types of incorporated municipalities: cities, boroughs, townships, and, in at most two cases, towns. The following cities, boroughs and townships are located in Sullivan County:

The population ranking of the following table is based on the 2010 census of Sullivan County.

All content from Kiddle encyclopedia articles (including the article images and facts) can be freely used under Attribution-ShareAlike license, unless stated otherwise. Cite this article:
Sullivan County, Pennsylvania Facts for Kids. Kiddle Encyclopedia.