It was listed on the National Register of Historic Places in 1978.

The building is located in the smallest and highest county seat in Pennsylvania, at an elevation of over 2,000 feet (610 m) above sea level. 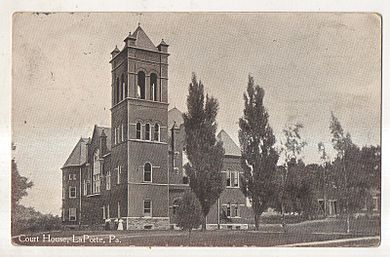 Courthouse on a 1918 postcard

Sullivan County was established in 1847. At this time, the county commissioners were informed by their council that they could use any building in the county, and the commissioners each had their own office. Initial plans to build a courthouse in Sullivan County were made as early as 1847. Despite some controversy about whether to place the courthouse in Forksville, Cherry Hill or Laporte, it was eventually decided that it would be located in Laporte. In 1851 Michael Meylert constructed the 44 foot square, three-story brick courthouse. By 1893, the old courthouse's walls were buckling and held together with iron rods. It was torn down in 15 days.

The architects Wagner & Reitmeyer of Williamsport designed the new courthouse. The Lawrence Brothers Builders were the contractors for the building, submitting a bid of $24,000. The bricks were laid by William Johnson and Thomas Edwards of Jamestown, New York, and James Gansel did the plastering. Construction began in June 1894 and the first court session in the new building was held in December.

Minor renovations were done in 1935. The slate roof was replaced with shingles in 1962, but these were replaced by slate in 2013. In 1969, an extension was built on the south side of the courthouse. Emergency lighting was installed in 1973 and the building's heating system was upgraded in 1977.

The main portion of the Sullivan County Courthouse has two floors, along with a basement, a chimney and a four-story bell tower. The building is made mostly of brick, but contains some cut stone and doors and windows are made of hardwood. The doors and windows have arched tops. The walls are 18 inches (46 cm) thick.

The main building is 92 by 60 feet (28 by 18 m), but the building also has a square-shaped area 28 feet (8.5 m) on a side. This area was used as a jail, and is now used for holding cells. The sheriff's residence was also in this part of the building, but he has long since moved out. The first floor of the building mainly consists of county offices, a sheriff's office, and the jail. A 50-by-60-foot (15 by 18 m) area of the second floor serves as a courtroom. The rest of the area mostly consists of small offices.

The Sullivan County Courthouse is located immediately southeast of the town square of the borough of Laporte. It is on the corner of Main Street and Muncy Street.

All content from Kiddle encyclopedia articles (including the article images and facts) can be freely used under Attribution-ShareAlike license, unless stated otherwise. Cite this article:
Sullivan County Courthouse (Pennsylvania) Facts for Kids. Kiddle Encyclopedia.