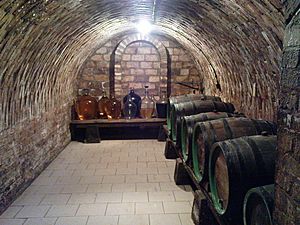 The basement is the lowest room in some buildings, almost always below the ground. There is another type of basement, called a subcellar. A subcellar is just like a basement, but more below it.

Most basements have lights.

Soon, basements were used to contain or save water.

All content from Kiddle encyclopedia articles (including the article images and facts) can be freely used under Attribution-ShareAlike license, unless stated otherwise. Cite this article:
Basement Facts for Kids. Kiddle Encyclopedia.