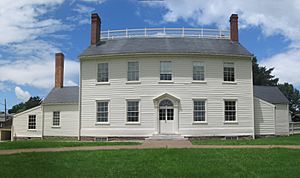 The Joseph Priestley House a National Historic Landmark in Northumberland

Northumberland was the American home of eighteenth-century British theologian, Dissenting clergyman, natural philosopher, educator, and political theorist Joseph Priestley (1733–1804) from 1794 until his death in 1804. The Joseph Priestley House still stands on Priestley Avenue and is a National Historic Landmark on the National Register of Historic Places (NRHP) and a museum administered by the Pennsylvania Historical and Museum Commission. There is one other property in the borough on the NRHP: the Priestley-Forsyth Memorial Library, built by a great grandson of Joseph Priestley. Much of the borough is part of the Northumberland Historic District, which is also on the NRHP. 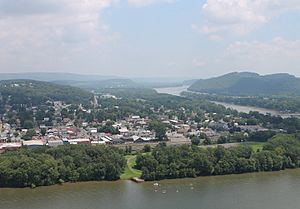 View of Northumberland from the Shikellamy State Park overlook

According to the United States Census Bureau, the borough has a total area of 1.6 square miles (4.1 km2), all of it land.

The Susquehanna River near Northumberland

English chemist and codiscoverer of oxygen Joseph Priestley lived in Northumberland for the last decade of his life, until his death in 1804. The Joseph Priestley House remains standing, as a museum.

World War II Major General Uzal Girard Ent, who had led the August 1943 raid on the Romanian oil refineries in Ploiești, chose Colonel Paul Tibbets to lead the 509th Composite Group, asking him to organize and lead a combat force to deliver a new type of explosive device that is so powerful that its full potential was unknown. Tibbets did so, and was the commander and pilot of the Enola Gay, the plane that delivered the first atomic bomb (Little Boy) on Hiroshima, Japan, on August 6, 1945. The Enola Gay's navigator on the mission was Captain Theodore "Dutch" Van Kirk, also a native of Northumberland, who was among the men hand-selected by Tibbets to accomplish the mission.

Daniel McFarlan Moore was born in Northumberland and was an electrical engineer and inventor, who developed a novel light source, the "Moore lamp," and a business that produced them in the early 1900s. The Moore lamp was the first commercially viable light-source based on gas discharges instead of incandescence; it was the predecessor to contemporary neon lighting and fluorescent lighting. In his later career, Moore developed a miniature neon lamp, which was extensively used in electronic displays, and vacuum tubes, which were used in early television systems.

David Fulmer, the author of a series of seven novels about Storyville, New Orleans and five other works of fiction and the writer-producer of the documentary film "Blind Willie's Blues," was born in Northumberland in 1950 and resided there until he was eighteen. Fulmer's mother and father were lifelong residents of the borough.

All content from Kiddle encyclopedia articles (including the article images and facts) can be freely used under Attribution-ShareAlike license, unless stated otherwise. Cite this article:
Northumberland, Pennsylvania Facts for Kids. Kiddle Encyclopedia.