The North Branch Division of the Pennsylvania Canal was a historic waterway that ran 169 miles (272 km) along the North Branch Susquehanna River between southern New York and north-central Pennsylvania in the United States. At its southern end, the canal connected with the West Branch Canal and the Susquehanna Division Canal at Northumberland, while on the north it connected with the Junction Canal and the New York canal system. Built between 1828 and 1856, the North Branch Canal was part of a large transportation network that included Pennsylvania's Main Line of Public Works.

The privately built Junction Canal of 18 miles (29 km) linked the North Branch Canal to Elmira. There the Junction Canal connected with the Chemung Canal, which led north to Seneca Lake and the Erie Canal. Through these connections, boats using the Pennsylvania Canal system were able to travel as far as Buffalo and Lake Champlain.

In 1858, the canal from Northampton Street in Wilkes-Barre to the state line was sold to the North Branch Canal Company, which in turn sold it to the Lehigh Valley Railroad in 1865. The railroad laid tracks along portions of the canal towpath and operated both until 1872, when it was authorized by the state legislature to close the canal. 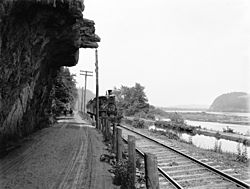 Hanging rock, road, railroad, canal, and Susquehanna River near Catawissa in about 1890–1901

In 1863, the New York Legislature authorized construction of another canal, the Chenango Canal Extension, meant to run about 40 miles (64 km) along the North Branch Susquehanna River from Binghamton, New York, to the Pennsylvania – New York border. The plans called for construction of an east–west crosscut canal linking the Chenango Canal Extension to the North Branch Canal, which followed the Chemung River rather than the North Branch Susquehanna River north of Athens. Cost overruns, waning enthusiasm for canals, and funding delays led to abandonment of the project in 1872, after most of the work on the northern 30 miles (48 km) of the line had been completed. Beyond planning, no work had been done on the southernmost 10 miles (16 km) when the project ended.

Lock No. 1 and a section of the original North Branch Canal in Northumberland were intact in 1986 as was Lock No. 2 below Bloomsburg. Occasional sections of canal bed remained between Shickshinny and West Nanticoke, and the West Nanticoke guard lock was intact. Canal bed was visible from the Lackawanna River toward Ransom and largely intact above Vosburg between Lackawanna Campground and Horse Race Falls. At Laceyville a museum known as the Oldest House was once a lockkeeper's house. Other remnants such as crib work, canal embankments, iron spikes, and timbers could be found here and there along the full length of the canal.

All content from Kiddle encyclopedia articles (including the article images and facts) can be freely used under Attribution-ShareAlike license, unless stated otherwise. Cite this article:
Pennsylvania Canal (North Branch Division) Facts for Kids. Kiddle Encyclopedia.