Catawissa is a borough in Columbia County, Pennsylvania, United States. The population was 1,552 at the 2010 census. It is part of the Bloomsburg–Berwick Metropolitan Statistical Area.

Catawissa is twinned with Uxbridge, Ontario. The historic link began in 1805, when the Uxbridge area was granted by the British crown to Dr. Christopher Beswick, first medical doctor north of the Oak Ridges Moraine. While not a Quaker, he lived in Catawissa before moving to the Uxbridge area. Beswick Lane in the Ontario town is named after him. 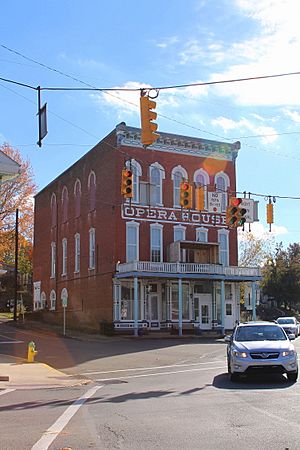 The area where Catawissa now is was originally owned by William Henry in 1769. Catawissa was laid out in 1787. At this time it was referred to as "Hughesburg" or "Catawissey". The lots of the town were distributed by lottery. When boats began to commonly travel along the Susquehanna River, Catawissa became locally important. Talk of a school in Catawissa began in 1796, and one was built there in 1800. The Catawissa Fire Company was founded in 1827. The Catawissa Deposit Bank was incorporated in 1871. The Catawissa Water Company was formed in 1882. A number of Masonic establishments were built in Catawissa in the mid to late 1800s.

The Catawissa Friends Meetinghouse was listed on the National Register of Historic Places in 1978.

The center of Catawissa is flat, with some hills in the northeast.

There were 710 households, out of which 27.3% had children under the age of 18 living with them, 42.5% were married couples living together, 14.1% had a female householder with no husband present, and 39.7% were non-families. 35.4% of all households were made up of individuals, and 20.3% had someone living alone who was 65 years of age or older. The average household size was 2.23 and the average family size was 2.89.

Catawissa is in the Southern Columbia Area School District.

Bloomsburg University of Pennsylvania, with over 9,400 students, is the nearest college.

All content from Kiddle encyclopedia articles (including the article images and facts) can be freely used under Attribution-ShareAlike license, unless stated otherwise. Cite this article:
Catawissa, Pennsylvania Facts for Kids. Kiddle Encyclopedia.