Catawissa Creek (colloquially known as The Cat) is a 41.8-mile-long (67.3 km) tributary of the Susquehanna River in east-central Pennsylvania in the United States. Its watershed has an area of 153 square miles (400 km2).

The waters of Catawissa Creek are highly acidic, with a pH of 4.5, due to runoff from an abandoned mine in the creek's watershed. Catawissa Creek is smaller than the nearby Fishing Creek due to a lack of major tributaries.

Catawissa Creek starts in Luzerne County, not far from Hazleton. It flows west and slightly south into Schuylkill County before flowing north into Columbia County and then west to the Susquehanna River, which it flows into at Catawissa. It parallels Catawissa Mountain for a significant portion of its course.

The surface rock in Catawissa Creek largely consists of sedimentary rock, such as sandstone and shale. However, there is also coal in the watershed. Major soils in the creek's watershed include the Leck Kill soil and the Albrights series. Most of the steeper hills in the watershed are situated near the headwaters of the creek.

At Catawissa Creek's headwaters, the concentration of iron in the water is 0.34 mg/L. Manganese's level of occurrence is 1.74 mg/L. Aluminium's concentration is 3.2 mg/L. Acidity makes up 34.5 mg/L and alkalinity makes up 0.17 mg/L.

Despite the presence of acid mine drainage in Catawissa Creek, its waters are largely clear.

The geology of Catawissa Creek at Nescopeck Mountain

The geological features near the headwaters of Catawissa Creek primarily include anthracite and ridges of sandstone. The valleys in this part of the watershed are narrow and steep. Elsewhere in the watershed, the topography consists mostly of less steep valleys and some hills.

A formation of greenish-gray sandstone near Catawissa Creek has been quarried for use in building. Below this layer is an olive colored sandstone that is home to Spirifer fossils. This layer is 40 ft (12 m) to 50 feet (15 m) thick. In a layer of red shale that is at least 100 ft (30 m) thick, there are fucoid fossils.

A type of soil known as the Leck Kill soil occurs along Catawissa Creek. Usually, cultivated Leck Kill soils are topped with an 8-inch (200 mm) thick layer of dark brown silt loam, with a subsoil of reddish-brown silt loam that extends to a depth of 32 inches (810 mm). Below the subsoil is a 6-inch (150 mm) thick layer of clay loam. The bedrock below this type of soil is red shale.

Catawissa Creek's source is in a strip mine area in southern Luzerne County and northern Schuylkill County near Audenried and McAdoo, a few miles southwest of the city of Hazleton. However, it quickly becomes lost in the strip mines of the area. The creek resurfaces in an iron-filled pool west of Interstate 81. It runs west through another strip mine before passing into Schuylkill County. 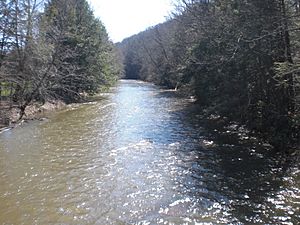 Upon entering Schuylkill County in East Union Township, Catawissa Creek flows approximately west-southwest into a valley. In the valley, it goes past the geographical features called Round Head and Blue Head, picking up a tributary near Blue Head. Beyond Blue Head, the creek flows past Sheppton and then Brandonville. It picks up a tributary called Rattling Run at the edge of the township, shortly before entering Union Township. 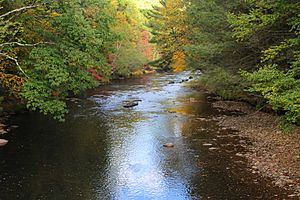 Catawissa Creek enters Columbia County in Beaver Township. It immediately passes by Bunker Hill and makes several meanders and passes by Beaver Valley. An old Conrail railroad starts paralleling Catawissa Creek at this point. In the southern part of Beaver Township, the creek is situated between Buck Mountain to the east and Catawissa Mountain to the west. The creek takes a sharp turn westwards as it passes by Shumans, where Pennsylvania Route 339 crosses the creek and Beaver Run flows into it. The creek closely follows Catawissa Mountain for a short distance before turning northwards and passing close to McCauley Mountain. It meanders past Dry Ridge and then Full Mill Hill, where Pennsylvania Route 339 crosses it again. The creek makes a hairpin turn northwards and picks up Gap Run before exiting Beaver Township.

Leaving Beaver Township, the creek enters Main Township. It continues following Catawissa Mountain, and, for a shorter distance, Full Mill Hill. It picks up Gap Run and Fisher Run from the left, Scotch Run from the right, and Furnace Run from the left in quick succession. After picking up Furnace Run, Catawissa Creek flows between Catawissa Mountain and Nescopeck Mountain in a high, narrow gorge. As the creek leaves the gorge, it passes Mainville and enters a plain. The creek turns west-southwest and the plain narrows slightly. On the south side of the plain is Catawissa Mountain and on the north side are lower hills. After a few miles, the creek flows out of Main Township and into Catawissa Township. In Catawissa Township, the creek flows southwest to Catawissa. It follows the southern border of Catawissa until it reaches its edge and turns northwards, following the western border of Catawissa. Pennsylvania Route 487 crosses over the creek at this point. At the western edge of Catawissa, the creek empties into the Susquehanna River.

Catawissa, meaning "growing fat", was the name applied to the stream by the Native American tribes which originally occupied the area at the mouth of Catawissa Creek. Fur traders lived along the Catawissa as early as 1728. According to legend, Catawissa Creek got its name because an Indian killed a deer near there "in the season when the animal fattens".

Settlers of European descent arrived on or near Catawissa Creek before 1776. The settlers included Alexander McCauley and Andrew Harger. McCauley left the area in 1776 and Harger was abducted by Indians. The Englishman Thomas Wilson was another early settler in the area. He lived in a cave on Catawissa Creek. The first mill in Columbia County was built on Catawissa Creek in 1774. Two other mills were built on the Creek in 1789 and 1799.

In 1886, a bridge known as the Catawissa Creek Bridge was built over Catawissa Creek by Columbia County. It was located at what was then Reichard's switch on the Philadelphia and Reading Railway. The bridge was destroyed by a flood in 1902, but later rebuilt. It was again carried away about 200 feet (61 m) downstream by ice and flooding on March 7, 1904, although it remained intact despite being carried away. The bridge, however, was not rebuilt again in that location.

While deep mining of coal in the Catawissa Creek watershed ceased in the 1970s, strip mining still continued for some time. However, in the 21st century, there are still five mining permits in the watershed and some coal is still extracted from refuse banks.

Several surveys of Catawissa Creek have been performed by the Pennsylvania Fish and Boat Commission. The first one was in 1957. There were two more surveys of chemical hydrology in 1966 and 1976. In 1997, the commission assessed the creek and its tributaries for usability as fisheries for the first time. 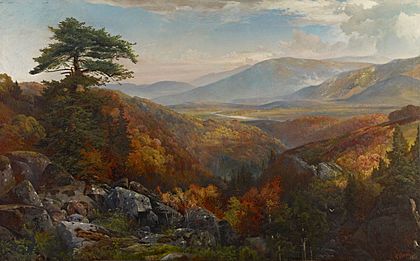 Valley of the Catawissa in Autumn by Thomas Moran, c. 1862, in the Crystal Bridges Art Museum. 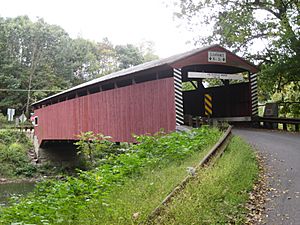 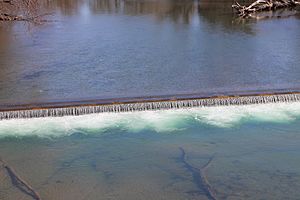 Some of Catawissa Creek's tributaries are known to contain trout, but the creek itself does not contain any fish due to pollution from acidic mine drainage. In 1966, some woodcocks were observed to live along Catawissa Creek.

Rhododendrons and hemlocks typically grow close to Catawissa Creek, while hardwood trees grow higher up in Catawissa Creek's river valley. In the late 1800s, a large number of plants resembling fucoids were discovered along Catawissa Creek near the border of Main and Catawissa Townships.

In the late 1950s, Catawissa Creek was found by the Pennsylvania Fish and Boat Commission to have good temperatures for trout habitation, but there was no aquatic life in the creek due to acid mine drainage. This situation continued through the 1960s and 1970s. However, by 1997, large populations of wild trout were found on some tributaries of Catawissa Creek. As of 2003, Catawissa Creek is considered to be a cold-water fishery between its headwaters and its confluence with Rattling Run. Several other tributaries, namely Dark Run, Davis Run, Little Catawissa Creek, and Messers Run are designated as high-quality cold water fisheries.

Aquatic macroinvertebrates are not common in and around Catawissa Creek, as of 2003. However, some adult members of the Allocapnia and Taeniopteryx genera have been observed. Large numbers of Amphinmeura and Leuctra have also been observed on the creek between its headwaters and the Audenried and Green Mountain tunnels.

In addition to Klingerman's Run, Fisher Run and Furnace Run flow down Catawissa Mountain to Catawissa Creek. Scotch Run flows into the creek from the east.

All content from Kiddle encyclopedia articles (including the article images and facts) can be freely used under Attribution-ShareAlike license, unless stated otherwise. Cite this article:
Catawissa Creek Facts for Kids. Kiddle Encyclopedia.