Dark Run is a tributary of Catawissa Creek in Schuylkill County, Pennsylvania, in the United States. It is approximately 4.3 miles (6.9 km) long and flows through Union Township. The watershed of the stream has an area of 4.55 square miles (11.8 km2). The stream is considered to be a High-Quality Coldwater Fishery and Class D Wild Trout Waters. Eight species of fish inhabit the stream. The main rock formations in the stream's watershed are the Mauch Chunk Formation and the main soil is the Leck Kill soil. The stream has several unnamed tributaries. 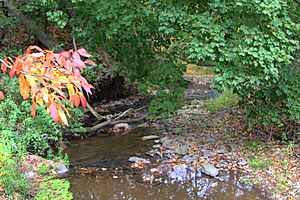 Dark Run begins in Union Township, a few tenths of a mile west of the community of Pattersonville. The stream flows north for several tenths of a mile, passing through a pond. It eventually turns east and passes through another pond before turning northeast. After some distance, the stream receives two unnamed tributaries and turns north-northeast, cutting through a ridge. On the other side of the ridge, it receives another unnamed tributary and passes through the southeastern corner of Ringtown before returning to Union Township. The stream continues north-northeast and receives another unnamed tributary before cutting through another ridge. It then meanders northeast for approximately a mile until it reaches its confluence with Catawissa Creek on the border between Union Township and East Union Township.

Dark Run, along with Little Catawissa Creek, contributes relatively fertile water to Catawissa Creek. However, the stream is affected by agricultural runoff.

The watershed of Dark Run has an area of 4.55 square miles (11.8 km2). Most of the watershed is in Union Township. However, the watershed also occupies nearly all of Ringtown. There is agricultural land throughout the watershed, especially in the valley of the stream. Additionally, it contains some club and association land in its upper and lower reaches.

A bridge carrying Farmers Road was built over Dark Run in 1960. It is a steel stringer bridge that is 26.9 feet (8.2 m) long. It is currently closed.

There are eight species of fish inhabiting Dark Run. These include brook trout, brown trout, and largemouth bass. However, the brown trout in the stream are from hatcheries and the largemouth bass come from farm ponds. Eight fish species inhabit the stream 2.66 miles (4.28 km) upstream of its mouth and six species inhabit it 1.71 miles (2.75 km) upstream of its mouth.

A 1997 report stated that Dark Run was a poor site for angling.

All content from Kiddle encyclopedia articles (including the article images and facts) can be freely used under Attribution-ShareAlike license, unless stated otherwise. Cite this article:
Dark Run Facts for Kids. Kiddle Encyclopedia.