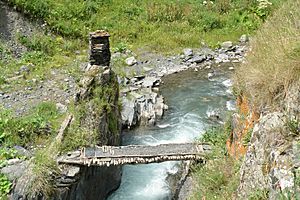 A beam bridge is a strong, horizontal structure that rests on two end supports, and carries traffic by acting as a beam.

Beam bridges are often used for heavy cars and trains to pass, and some are also built for people to walk on. Beam bridges used to be made from wood and were called log bridges. Modern ones are mostly made of steel. Beam bridges are usually placed over highways, rivers or gaps in the earth so people or cars can cross over them. Beam bridges are simple but they cannot be as long as more complex and expensive kinds. Beam bridges can be connected to make one longer bridge.

All content from Kiddle encyclopedia articles (including the article images and facts) can be freely used under Attribution-ShareAlike license, unless stated otherwise. Cite this article:
Beam bridge Facts for Kids. Kiddle Encyclopedia.