Schuylkill County (pronounced locally) is a county in the Commonwealth of Pennsylvania. As of the 2010 census, the population was 148,289. The county seat is Pottsville. The county was created on March 1, 1811, from parts of Berks, Northampton, and Northumberland counties and named for the Schuylkill River.

Schuylkill County comprises the Pottsville, PA Micropolitan Statistical Area. It is located in the heart of the anthracite Coal Region of Eastern Pennsylvania.

Schuylkill County was created via an Act of Assembly on March 1, 1811, from portions of Berks, Lancaster, and Northampton counties. More land was added to the county in 1818, from Columbia and Lehigh counties. An early book of Schuylkill County history was written by Daniel Deibert in 1802.

The Reading and Pennsylvania railroads: In the early 19th century southern Schuylkill County was served by the Union Canal out of Pine Grove Township with connections west, and the Schuylkill Canal southward from Port Carbon. Coal mined by Lehigh Coal and Navigation in the Tamaqua and Coaldale areas was often shipped down the Lehigh Canal from Jim Thorpe in neighboring Carbon County. To the north, Broad Mountain was a natural barrier to navigation. Other means would be required to transport coal out of the rich basin of the Mahanoy Valley. Numerous railroads were begun north of the headwaters of the Schuylkill Canal.

Through the 1830s and 1840s, short railroads sprouted up at numerous areas in the county. Of prime importance was the Mine Hill and Schuylkill Haven, which served the Schuylkill Canal. Chartered in 1831, tracks were laid from the "flats" in Schuylkill Haven along the river through Cressona and Minersville to Tremont. The railroad eventually reached Ashland and Locust Gap via the Gordon Planes.

Construction beginning in 1829, the Little Schuylkill Railroad ran from Port Clinton northward to Mahanoy Junction above Tamaqua. It would become the keystone of the Philadelphia and Reading system, serving as a gauntlet for its eastern and western branches. Connecting with it were four important lines. The 146 mile (235 km) Catawissa Railroad operated from Mahanoy Junction to West Milton, providing access to the Mahanoy region by joining the northern terminus of the Little Schuylkill with connections to New York City and Scranton. At Port Clinton, it connected with the P&R's main line from Mount Carbon. Its most important connection would be with the Mahanoy and Broad Mountain Railway via Mahanoy Tunnel and East Mahanoy Railroad.

The Schuylkill River headwaters are found in the county, starting in the Appalachian Mountains, and flows through many towns and the city of Reading, Pennsylvania to Philadelphia where it flows into the Delaware River. The Schuylkill drains the majority of the county while some western and northern areas of the county are drained by the Susquehanna River. The Swatara Creek, Wiconisco Creek, Mahantango Creek, Mahanoy Creek, and Catawissa Creek all start in Schuylkill County and are tributaries of the Susquehanna. Areas of the eastern portion of the county drain into the Lehigh River via the Quakake Creek, Nesquehoning Creek, Mahoning Creek, and Lizard Creek, all of which also start in the county. To the south, southern Schuylkill county is home to Blue Mountain and the Appalachian Trail. Broad Mountain crosses the county from northeast to southwest.

Schuylkill County is located in northeastern Pennsylvania's Coal Region. It is located just north of the Lehigh Valley and Reading metropolitan areas. Portions of eastern Schuylkill County around Tamaqua are located in the Pocono Mountains. As a result, like other portions of the Poconos, eastern Schuylkill has experienced an influx of people from New York City and New Jersey who commute into Manhattan each day. The commute can take up to two hours each way due to distance and traffic. Far western areas of the county are located near Harrisburg and are sometimes considered to be located in South Central Pennsylvania. 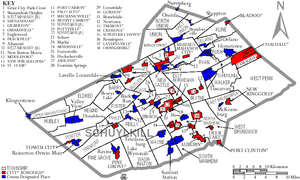 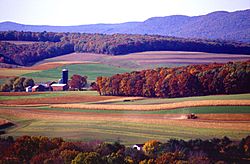 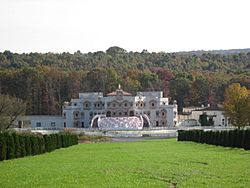 Under Pennsylvania law, there are four types of incorporated municipalities: cities, boroughs, townships, and, in at most two cases, towns. The following cities, boroughs and townships are located in Schuylkill County:

The population ranking of the following table is based on the 2010 census of Schuylkill County.

All content from Kiddle encyclopedia articles (including the article images and facts) can be freely used under Attribution-ShareAlike license, unless stated otherwise. Cite this article:
Schuylkill County, Pennsylvania Facts for Kids. Kiddle Encyclopedia.