Shenandoah is a borough in Schuylkill County, Pennsylvania, United States, located in the anthracite-mining region approximately 100 miles (160 km) northwest of Philadelphia. It is distinct from Shenandoah Heights, which is part of West Mahanoy Township immediately to the north.

The area that became Shenandoah was first settled by a farmer named Peter Kehley in 1835 where he cleared a patch of land at the center of the valley and built a log cabin. Peter Kehley maintained his farm for about 20 years in total isolation. He sold his claim to the Philadelphia Land Company, which in anticipation of the opening of coal mines in the area, laid out the town in 1862. 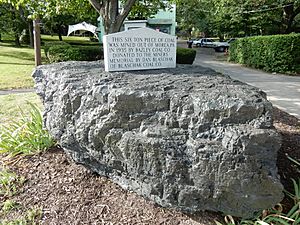 Booming growth occurred during the Civil War years caused by the development and opening of several anthracite coal mines.

After the original influx of English, Welsh, Irish, and German immigrants a large influx of people from central, eastern and southern European countries such as Poland, Lithuania, and Italy occurred in the decades before and after the turn of the 20th century. 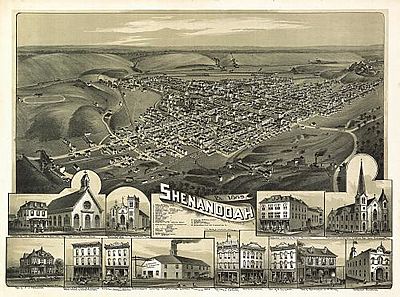 In Schuylkill County Court, January 1902, those interested filed their petition for retail, wholesale, bottling or brewing licenses at the Office of the Clerk of the Court. Shenandoah was represented with bars and breweries. This coal town offered more bars per thousand people than any other location in the world.

The Lehigh Valley Railroad Station served as the main passenger terminal in Shenandoah, but because of the coal industry, it was not the only railroad to service Shenandoah. The town was also served by the Pennsylvania Railroad and Reading Railroad, making Shenandoah the only borough in Pennsylvania to be served by three railroad companies.

During the Great Coal Strike of 1902 the Pennsylvania National Guard was called into Shenandoah to keep the peace and curb rioting by angry miners. The strike would only be resolved after President Theodore Roosevelt intervened.

Shenandoah, the rise and fall of the coal industry, and the dismantling of the Molly Maguires was one of the subjects examined by George Leighton in his 1939 book Five Cities: The Story of Their Youth and Old Age.

Shenandoah Valley was featured in the documentary 2012 film "Shenandoah, Pennsylvania" exploring the hate crime murder of Luis Ramirez and the local police attempting to cover it up.

There were 2,649 households out of which 20.0% had children under the age of 18 living with them, 32.5% were married couples living together, 13.5% had a female householder with no husband present, and 47.9% were non-families. 42.9% of all households were made up of individuals and 26.0% had someone living alone who was 65 years of age or older. The average household size was 2.07 and the average family size was 2.84.

All content from Kiddle encyclopedia articles (including the article images and facts) can be freely used under Attribution-ShareAlike license, unless stated otherwise. Cite this article:
Shenandoah, Pennsylvania Facts for Kids. Kiddle Encyclopedia.