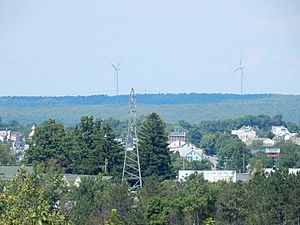 Frackville is a borough in Schuylkill County, Pennsylvania, United States, incorporated in 1876. Today the intersection of Interstate 81 and Pennsylvania State Route 61 is located near the borough, which is approximately 102 miles (164 km) northwest of Philadelphia and 60 miles (97 km) southwest of Scranton. Frackville is named for Daniel Frack, an early Anglo-American settler.

Frackville was settled in 1861 and incorporated in 1876, when the villages of Frackville and Mountain City merged to form the borough of Frackville. The name "Mountain City", however, is still a common nickname for the borough. A past diner and beer distributor were both named after it. Early in the twentieth century, anthracite coal mining was the chief industry of the region, although Frackville remained a predominantly residential community. The Mahanoy Plane, which operated from 1862 to 1931 on Broad Mountain just to the north of the borough, was able to hoist 50,000 tons of coal daily. There is a small patch-town owning the name "Mahanoy Plane" at the northern foot of Frackville's Broad Mountain. Industrial relics and infrastructure remain in the thick forest north of the borough's youth baseball complex but historical preservation or restoration has yet to take place.

In 1922, Frackville had its own independent brewery that was short lived due to Prohibition.

Frackville celebrated its centennial in 1976 while James Nahas was mayor. It was a weeklong event from August 22 to 28 which hosted parades each night and brought the community closer together. The borough's 125th anniversary celebration was held in 2001 and had similar events and effects. It culminated with a Frackville Cruise Night that had routes running throughout the borough. 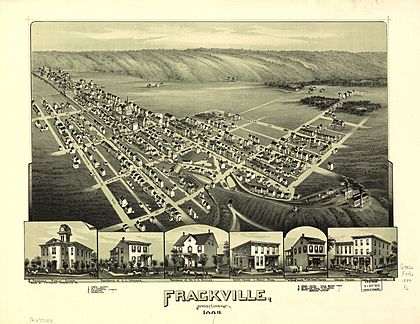 Frackville sits in the middle of Northeastern Pennsylvania's historic Coal Region, about 4 miles south of Shenandoah. Coal mining has largely ceased in the area. Coal mining was never actually done in Frackville itself; it was, however, a source of transporting the coal through the now-defunct railroad companies. Many of Frackville's residents are employed at local factories, retail outlets, and the numerous Pennsylvania State Prisons in the immediate area. Many more commute daily to the cities of Pottsville, Hazleton, Allentown, Reading or Harrisburg to work. Frackville is indeed surrounded by many prisons.

Located at Interstate 81 Exit 124, Frackville is a popular stop for travelers. It is home of the Dutch Kitchen, a well publicized restaurant that is a renovated diner. The Schuylkill Mall, a former Crown American shopping mall, resides on the south end of the borough. 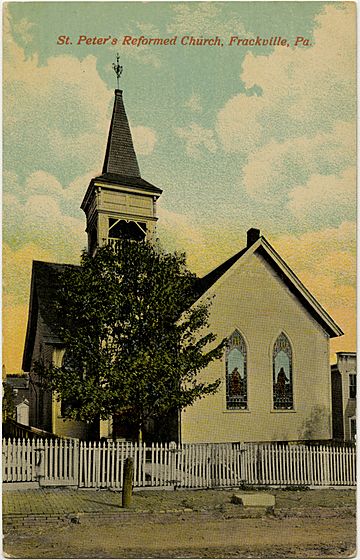 In 1974, Lorraine Stanton began interviewing the elderly citizens of Frackville in preparation for the town’s 1976 Centennial. The result of her research and interviews during that period are found in the Old Frackville Tales—articles printed in the Shenandoah Evening Herald newspaper from 1975 until the culminating Centennial Edition in August 1976. The Tales can be found at the State Library in Harrisburg. However, her interest in promoting the town’s history lingered long after the Centennial. She continued collecting articles about and pictures of the town and its residents, as well as artifacts reflecting life during the years following our town’s incorporation. She envisioned a central home for her collection of files and pictures, in addition to those items given to her by other people over the years. When the Frackville Borough Council agreed to give space in the new Borough Complex and acquire her collection, the vision became a reality. The Frackville Museum welcomes the donation of any items relevant to the town, such as small collectibles, local school memorabilia, Frackville souvenirs, or business items from years gone by.

In 2003, Frackville became a partner of the Upper Schuylkill Regional Main Street program along with neighboring communities Ashland, Girardville, Mahanoy City, Ringtown and Shenandoah. The numerous educational programs including grant writing courses arranged through the regional program made it possible to complete $523,304.00 in projects in the targeted central business district in Frackville Borough from 2004 and continuing through 2008. The Upper Schuylkill Design Challenge Grant program provides facade assistance to business and property owners for restoration projects.

Frackville has over half a dozen parks which can be used by residents of all ages. Among the borough’s sports leagues are: Frackville Mountaineer mini, pee-wee and midget football teams, Frackville Area Softball Association, Frackville Legion Baseball Team, Frackville tee-ball, intermediate and Little League Baseball teams, CYO basketball teams and many others. The numerous civic agencies such as the Elks, American Legion, Rotary, Masons, Knights of Columbus and Lions Club hold regular events to involve the citizens of the borough. Frackville has a borough pool which opens each spring for the citizens to use. There are more than a dozen churches in the borough. The borough is serviced by three fire companies and the Frackville Ambulance Service.

The Frackville Pool will be closed for the 2015 summer due to damage from considerable snowfall and ice buildup. There is an committee of residents currently working to establish a community pool at an as yet undisclosed site.

In 1986 music historian Maxim W. Furek published "The Jordan Brothers: A Musical Biography of Rock's Fortunate Sons." The book traced the career of Frackville's Jordan Brothers who appeared on Dick Clark's "American Bandstand" and were headliners on Clark's 49-day "Caravan of Stars" that toured the United States and Canada. The Jordans were featured on several Alan Freed stage shows and were mainstays on all the important East Coast TV programs, especially in the Tri-State area.Their biggest hit, in 1966, was "Gimme Some Lovin.'" In a commercial bumper during an episode of Pardon the Interruption that first aired August 3, 2010, Tony Kornheiser mentioned that in Frackville it's 20 degrees colder than anywhere else on Earth.

All content from Kiddle encyclopedia articles (including the article images and facts) can be freely used under Attribution-ShareAlike license, unless stated otherwise. Cite this article:
Frackville, Pennsylvania Facts for Kids. Kiddle Encyclopedia.