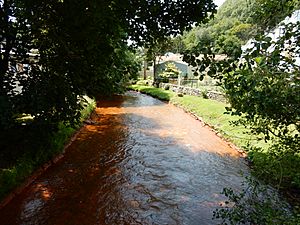 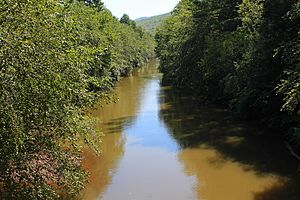 Mahanoy Creek's source is in strip mines in the eastern part of Schuylkill County, near Buck Mountain. It heads west for a short distance before crossing under Pennsylvania Route 54 and entering Mahanoy City, where it picks up the tributary North Mahanoy Creek. Mahanoy Creek continues westward, heading into Mahanoy Township again, and goes through more strip mines. It begins paralleling Bear Ridge for several miles, passing the communities of St. Nicholas and Boston Run before entering Gilberton. In Gilberton, the creek passes under Pennsylvania Route 924 and goes through by the former Mahanoy Plane. Upon leaving Mahanoy Township, the creek enters Butler Township. Soon after entering this township, the creek passes through Girardville, picking up Shenandoah Creek. It parallels Pennsylvania Route 54 for some distance into Ashland. Upon leaving Ashland, the creek stops paralleling Pennsylvania Route 54 and turns south through a gap in Ashland Mountain, leaving behind the strip mines. At Gordon, it picks up Little Mahanoy Creek and then turns west again, meandering out of Butler Township. The creek then briefly meanders through Barry Township before passing into Eldred Township. It flows on the northern side of a mountain in Weiser State Forest. Upon leaving Eldred Township, the creek enters Northumberland County.

Mahanoy Creek enters Northumberland County in East Cameron Township. It flows westward for a number of miles through a valley with Line Mountain to the south and Mahanoy Mountain to the north. The creek passes under Pennsylvania Route 125 in this valley. The creek passes into West Cameron Township, flowing west and goes through the township for several miles. It then flows into Little Mahanoy Township. After a short distance, it leaves behind the Line Mountain/Mahanoy Mountain valley and picks up Zerbe Run. Mahanoy Creek then turns southwest and passes by Dornsife before cutting through a gap between Little Mountain and Line Mountain and exiting Little Mahanoy Township. At this point, the creek enters Jackson Township and picks up Schwaben Creek, its last tributary, after some distance. Mahanoy Creek then meanders west to its mouth on the Susquehanna River north of Herndon and ten miles south of Sunbury.

There are large quantities of dissolved iron and aluminum in the waters of Mahanoy Creek. Additionally, there are trace amounts of various metals, including cobalt, nickel, copper, zinc, and lead, sulfates, manganese, and beryllium. There are traces of numerous other metals in the waters, but their concentrations conform to drinking water standards.

Out of the 35 or more acid mine drainage sources in the Mahanoy Creek watershed, the four most significant ones are the Locust Gap Tunnel, the Packer #5 Breach, the Packer #5 Borehole, and the Girard Mine seepage. The 15 most significant sources have discharges of between 29,200 liters per minute and 680 liters per minute. The pHs of the sources range from 3.9 to 6.7. The iron concentrations at these sites ranges from 2.1 to 18 milligrams per liter. The concentrations of manganese ranges from 0.95 to 6.4 milligrams per liter.

Some water from the Shamokin Creek watershed enters the Mahanoy Creek watershed via various mine tunnels, mainly the Doutyville, Helfenstein, the Locust Gap, and the Centralia Mine discharges. Water from Mahanoy Creek also flows through mine tunnels into Shamokin Creek. The discharge of the creek at various locations ranges from 0 to 320 cubic feet per second. The discharge of acid mine drainage in the creek ranges from 0 to 17.2 cubic feet per second. In 2001, the discharge was typically found to be higher in March than in August.

While there are sewage-treatment plants in the larger communities in the Mahanoy Creek watershed, there are also leaky sewage disposal systems that discharge sewage into the stream's tributaries. The creek experiences atmospheric disposition, a type of runoff. 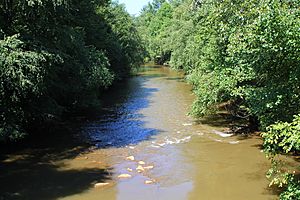 There are 24 coal beds from the Pennsylvanian subperiod, which are part of the Llewellyn Formation and the Pottsville Formation. The coal beds are 0.6 feet (0.18 m) to 8.3 feet (2.5 m) thick. Mining of these coal beds has been done at depths of over 2,500 feet (760 m) underground. There are significant silt deposits on the creek downstream of Ashland. In the watershed, there are a number of close-to-parallel ridges and valleys. These tend to be oriented in the same direction as the creek itself, east to west. The highest elevation in the Mahanoy Creek watershed is 2,090 feet (640 m) above sea level in the eastern part of the watershed, not far from Delano. The lowest elevation in the watershed is 420 feet (130 m) at the mouth. The elevations of the ridges tend to be between 1,400 feet (430 m) and 1,800 feet (550 m) above sea level, while the valleys are between 600 feet (180 m) and 800 feet (240 m) lower.

The stream bed of Mahanoy Creek has an iron crust near Girardville, but some fish live in that area. 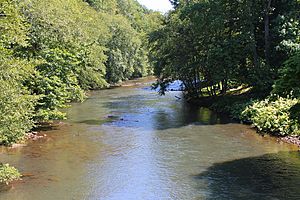 Mahanoy Creek near the Dornsife Gap 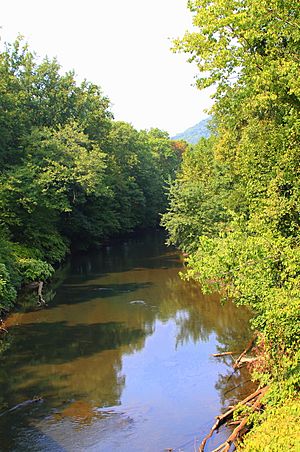 Mahanoy Creek looking upstream near its mouth, from Pennsylvania Route 147

The Mahanoy Creek watershed is 66 percent forested land, 21 percent agricultural land, 9 percent barren mined land, and 4 percent developed land. However, the upper part of Mahanoy Creek is 50 percent forested land, 44 percent mined land, 5 percent developed land, and less than 1 percent agricultural land. There are six boroughs in the upper part of the watershed. There are a total of 28 municipalities in the watershed.

The eastern edge of the Mahanoy Creek watershed is marked by Locust Mountain and Vulcan Hill. The southern edge is formed by Broad Mountain, Fisher Ridge, and Line Mountain. The northern edge is formed by Little Mountain, Locust Mountain, and Mahanoy Mountain. The drainage system of the watershed is a trellis pattern, a dentritic pattern, or an angular drainage pattern.

The streams in the Mahanoy Creek watershed tend to meander relatively little, but the main creek meanders somewhat between Gordon and Lavelle and near its mouth.

Mahanoy Creek's name comes from a corruption of the Delaware Indian word "mahoni" or "maghonioy". The former word means "lick". The area was owned by the Iroquois before European settlers arrived. The community of Mahanoy City is named after Mahanoy Creek.

Nathan Beach and several other people filed an application for 34 lots at the headwaters of Mahanoy Creek in 1794.

In the late 19th century, a company piped waste from the production of illuminating gas (for gas lighting) into Mahanoy Creek. In Gilberton, Mahanoy Creek used to be underground, but surfaced before 1940.

Anthracite was mined in the upper part of the Mahanoy Creek watershed from 1840 until 1950. However, farming was also done in the western part of the watershed in the early 20th century. Most of the deep mines ceased operation by 1960. Surface mines instead continued mining operations in the watershed. A total of 12 million short tons of anthracite were mined in the creek's watershed in 1917. This was 12% of the anthracite yield of the state of Pennsylvania in that year. In the 1910s, there were 40 washeries and collieries that drained into the creek. Large amounts of culm also flowed into it during this time. The layer of coal silt on the banks of the creek was 40 feet (12 m) by 1940. Several mines remain active in the 21st century, but they mostly reprocess coal waste.

In the fall of 2000, twelve species of fish were observed during electrofishing. They included eastern blacknose dace, northern hognosed suckers, shiners, smallmouth bass, and rock bass.

An October 2001 survey of Mahanoy Creek identified two species of fish each at Ashland and Girardville. There were 20 individuals at the latter location and 22 at the former. There were also 13 species and 134 individuals at Gowen City, and 14 species and 545 individuals at the creek's mouth. Additionally, 1003 individuals and 20 species of fish were observed at the mouth of the tributary Schwaben Creek. White Suckers were found at each of the aforementioned sites. Other fish species found on Mahanoy Creek and Schwaben Creek include the swallowtail shiner, the rosyface shiner, the river chub, the banded darter, and the shield darter. Brown trout, longnose dace, and eastern blacknose dace have also been observed in the watershed. Historically, deer came to the creek to consume salt.

There are second-growth forests near Kehly Run, a tributary of Mahanoy Creek.

The Pennsylvania State Game Land Number 84 is located immediately south of Mahanoy Creek between Helfenstein and Dornsife. The Sen. James J. Rhoades Nature Trail is a walking trail along the creek in Barry Township. It was dedicated to James J. Rhoades on May 8, 2010. Catch and release fishing of smallmouth bass and largemouth bass is permitted on the creek.

All content from Kiddle encyclopedia articles (including the article images and facts) can be freely used under Attribution-ShareAlike license, unless stated otherwise. Cite this article:
Mahanoy Creek Facts for Kids. Kiddle Encyclopedia.