Girardville is a borough in Schuylkill County, Pennsylvania, 58 miles (93 km) northwest of Reading. Anthracite coal deposits are in the region. Coal-mining provided employment and incomes for many of the 3,666 people who lived there in 1900. In 1910, 4,396 individuals called it home. The population was 1,430 in the 2020 census. It was founded in 1832 and is named after Stephen Girard of Philadelphia who purchased large land holdings in and around the town. It was incorporated as a borough in 1872. 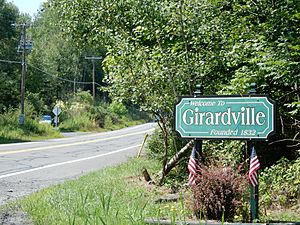 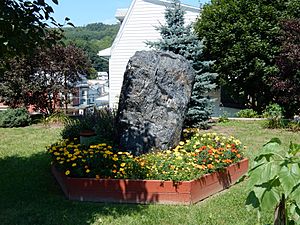 The Anthracite on Main Street.

There were 767 households, out of which 23.7% had children under the age of 18 living with them, 41.5% were married couples living together, 14.1% had a female householder with no husband present, and 36.6% were non-families. 34.4% of all households were made up of individuals, and 19.0% had someone living alone who was 65 years of age or older. The average household size was 2.27 and the average family size was 2.90.

A citizen who became famous in the "wild west" is "Captain Jack" Crawford, (also known as the "Poet Scout") western actor, scout for General George Crook's campaign in the Black Hills, native of Carndonagh, Ireland and performer with William F. Cody (Buffalo Bill), was postmaster and had a small general store in Girardville in 1869−1874, leaving town to go out west to find Gold. His poem "Only a Miner Killed" about his experiences as a miner in the region was said to be used by Bob Dylan as the basis for his song "Only a Hobo."

Colonel Patrick H. Monaghan, a native of County Mayo, Ireland, who emigrated at the age of five and later became a naturalized American citizen, won the U.S. Medal of Honor, for recapturing the regimental flag of the 7th New York Heavy Artillery on June 17, 1864 while fighting in the Siege of Petersburg, Virginia during the American Civil War. A teacher in the Schuylkill County public schools from 1873 to 1916, Monaghan was also appointed to the post of superintendent of the school system in Girardville, a position he continued to hold from the early 1880s until August 20, 1909 when he was moved by his school board into an elementary school principal’s position, according to the Philadelphia Inquirer:

The town of Girardville is alluded to in the comic book series Amelia Rules! Created by Girardville native Jimmy Gownley, the series, begun in 2001, has won several awards, been translated into numerous languages, and even turned into a stage musical. In 2008, it was named the Pennsylvania Library Association's One Book Award Winner. Although Gownley is no longer a resident of Girardville, his work references the town in many ways, including being set in a fictional version of Connerton, a town formerly located between Girardville, and Lost Creek, as well as mentioning landmarks such as Centiole's Pizza

The Amelia Rules! series is currently published by Simon & Schuster.

Joseph, Charles and Albert Drulis were born and raised in Girardville and all three went on to star in football at Temple University. Charles and Albert went on to play in the NFL. All 3 brothers have been inducted into the Pennsylvania sports hall of fame. Chuck Drulis was an all-pro lineman for the Chicago Bears and went on to coach in the NFL after his playing career. Chuck Drulis is credited with introducing the "safety blitz" into the league while the defensive coordinator with the St. Louis Cardinals. Chuck's wife, Dsle Drulis, was the artist selected to design all of the art for the Pro Football Hall of Fame in Canton, Ohio. She used her husband and sons Chuck Jr. and Kerry as the models for the sculptures over the main entry to the facility.

Bob Simononis, born and raised in Girardville, was a star pitcher for the Girardville High School Blue Aces. Bob was named the Most Outstanding Player in the Third Annual Legion Pennsylvania East-West All-Star Game of 1949, and went on to be drafted by the Detroit Tigers of MLB. His baseball career was written about in Connie Mack's book, My 66 Years in the Big Leagues. Charles Fullis was another famous baseball player from Girardville.

Actress Mary Boland, born in Girardville, appeared in many films during the first half of the 20th century, including such popular ones as The Women, Ruggles of Red Gap and Pride and Prejudice.

All content from Kiddle encyclopedia articles (including the article images and facts) can be freely used under Attribution-ShareAlike license, unless stated otherwise. Cite this article:
Girardville, Pennsylvania Facts for Kids. Kiddle Encyclopedia.