Kids Encyclopedia Facts
Not to be confused with Ashland Township in Clarion County.

Ashland is a borough in Schuylkill County in the U.S. state of Pennsylvania, 15 miles (24 km) northwest of Pottsville. A small part of the borough also lies in Columbia County, although all of the population resided in the Schuylkill County portion as of the 2010 census. The borough lies in the anthracite coal region of eastern Pennsylvania. Settled in 1850, Ashland was incorporated in 1857, and was named for Henry Clay's estate near Lexington, Kentucky. The population in 1900 was 6,438, and in 1940, 7,045, but had dropped to 2,817 at the 2010 census.

Ashland is part of the Pottsville Micropolitan Statistical Area.

It is the location of Pioneer Tunnel, a tourist attraction featuring a tour of a coal mine on mine cars and a separate 3 ft 6 in (1,067 mm) narrow gauge steam train ride.

For a long time after southern Pennsylvania was settled, the area that is now Ashland was mostly wilderness except for a hotel in the area in 1820. A prominent citizen of the county, Burd S. Patterson, however, predicted that the area would eventually become a prominent mining town. In 1845, John P. Brock and James Hart joined Patterson in buying 800 acres (320 ha) of land in the Ashland area. In 1846, a group of miners led by Patrick Devine developed coal seams in veins in the area. However, the town progressed little over the next three years. By 1857, though, the town had 3,500 people, and Ashland became a borough, detaching itself from Butler Township. The first post office was built in 1853, and the first church was built in 1855.

The Mothers' Memorial is located at the junction of Pennsylvania Route 54 and Pennsylvania Route 61. The Mothers' Memorial is a bronze reproduction of the famous James Abbott McNeill Whistler artistic painting: An Arrangement in Grey and Black No. 1, commonly known as "Whistler's Mother". The WPA-Built Mothers' Memorial honors all mothers of the United States and it's the only one of its kind in the world. The Mothers' Memorial was commissioned and erected during the misery of the Great Depression in the United States by the Ashland Boys' Association and it was dedicated on Sunday, September 4, 1938, during Labor Day weekend. President Franklin D. Roosevelt economic recovery plan of the Works Progress Administration (WPA) completed the historical stone masonry work.

Pennsylvania Route 61 takes a detour just north of Ashland, where a "Keep Out" sign straddles the original highway that used to lead to the abandoned town of Centralia, where an underground mine fire has been burning since 1962. 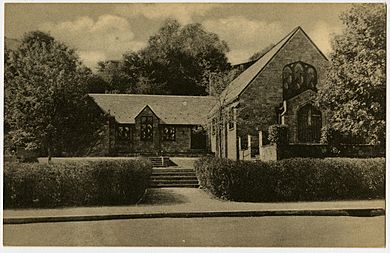 The majority of Ashland is forest, with an urban area in the center. Most of the borough's terrain is steep hills, but the hills are gentler near the center. The southern border of the borough follows the top of Ashland Mountain, which rises 400 to 600 feet (120 to 180 m) above the center of town, except where Mahanoy Creek, a tributary of the Susquehanna River, passes through a water gap in the mountain in the southeast part of the borough.

All content from Kiddle encyclopedia articles (including the article images and facts) can be freely used under Attribution-ShareAlike license, unless stated otherwise. Cite this article:
Ashland, Pennsylvania Facts for Kids. Kiddle Encyclopedia.