Minersville is a borough in Schuylkill County, Pennsylvania, United States, located four miles (6 km) west of Pottsville. Anthracite coal deposits are plentiful in the region. The population was 4,397 at the 2010 census.

In the year 1783, a settler by the name of Thomas Reed traveled through the valley between the Thomaston Mountains and the Gap Rocks. At this junction, several mountain streams converged where this settler built a log cabin and a sawmill on the west Branch of the Schuylkill River, just below the mouth of Wolf Creek. Shortly thereafter, he built a tavern on the South Side of the Sunbury Trail on the present site of the Saint Vincent DePaul's Church.

This tavern was referred to as the "Half Way House", because it was half-way between Reading and Sunbury. The Sunbury Trail was the first road through Schuylkill County and was known as the Kings Highway which was authorized by the Crown of England, King George III in 1770.The early settlers engaged in timbering as their first livelihood, but experienced difficulty in transporting the heavy logs out of the valley. The rough timber was floated by raft to Schuylkill Haven to the Schuylkill Canal and on to Reading where it was sold or traded for other products. Necho Allen discovered coal in 1799, but it was not until 1814 that any actual mining took place. Dr. McFarland, a scientist, opened a vein at York Farm near Pottsville. Later, in 1818, Jacob Reed, son of the original founder, opened another vein in the Minersville Area. 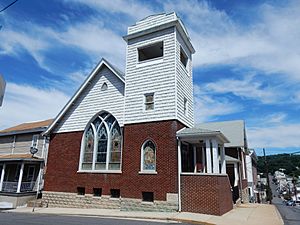 The completion of the Schuylkill Haven and Mine Hill Railroad provided the means to transport the coal produced in the region. The development of the coal industry grew rapidly and attracted many immigrants. Experienced English and Welsh miners arrived first from their home lands. Next arrivals were the Germans and Irishman, soon to be followed by many other ethnic groups that make up the community. The influx of inhabitants to the community promoted the need to begin municipal planning. Titus Bennett laid out the town in 1830 on parts of two tracts of land patented to Lawrence Lewis and Robert M. Lewis on July 20, 1829, at that time part of Branch Township. On May 2, 1830, Minersville citizens held an election at the home of David Buckwater for the purpose of electing a Burgess. Samuel Richert was elected to this position, as well as the following men who served on the first Council: John Provst, John Patrick, Dr. Anthony Steinberger, John L. Swaine, John B. Hahn, David Buckwater and Daniel R. Bennet. The first president of the Town Council was Daniel R. Bennet; first treasurer, Thomas J. Harman, Clerk, and Milligan G. Gable, High Constable. Minersville was incorporated as a borough on April 1, 1831 by Act of the legislature approved by Governor George Wolf. Minersville School District was involved in a national court case gaining much attention; Minersville School District v. Gobitis, 1940. This case dealt with a family whose children would not salute the flag or recite the Pledge of Allegiance because of their religious beliefs (they were Jehovah's Witnesses). This case would put Minersville "on the map," as it reached all the way to the Supreme Court. The final verdict was that the school district could, in fact, make students stand, salute, and recite the Pledge of Allegiance. This decision came under much scrutiny and would not stay long, as it would be overturned shortly thereafter by West Virginia State Board of Education v. Barnette. 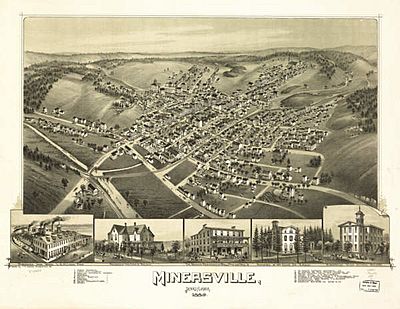 In 2015, Minersville Area District's ranking declined to 437th out of 493 Pennsylvania school districts, in 2015, by the Pittsburgh Business Times. The ranking is based on the last 3 years of student academic achievement as demonstrated by PSSAs results in: reading, writing, math and science and the three Keystone Exams (literature, Algebra 1, Biology I) in high school.

In October 2015, Pennsylvania Auditor General Eugene DePasquale reported that Minersville Area Junior Senior HIgh School was among the 561 academically challenged schools that have been overlooked by the Pennsylvania Department of Education. He also reported the Pennsylvania Department of Education failed to take any action to remediate the poorly performing schools to raise student academic achievement or to provide them with targeted professional assistance. In 2007, Minersville Area School District was ranked 348th of 501 school districts for academic achievement.

High school aged students starting with sophomores can attend the taxpayer-funded Schuylkill Technology Center, which has its South location in neighboring Mar-Lin, for training in the building trades, auto mechanics, culinary arts, allied health careers and other areas. They may also attend the North campus for programs not offered at the South campus

Minersville residents may also apply to attend any of the Commonwealth's 14 public cyber charter schools (in 2013) at no additional cost to the parents. Gillingham Charter School is public charter school located in Pottsville, within 5 miles of Minersville. It has been operating since 2009. The resident's public school district is required to pay the charter school and cyber charter school tuition for residents who attend these public schools. The 2015 tuition rate that Minersville Area School District must pay was Elementary School - $8,124.82, High School - $8,949.86. By Commonwealth law, if the district provides transportation for its own students, then the district must provide transportation to any school that lies within 10 miles of its borders. Residents may also seek admission for their school aged child to any other public school district. When accepted for admission, the student's parents are responsible for paying an annual tuition fee set by the Pennsylvania Department of Education.

Schuylkill Intermediate Unit #29 provides a wide variety of services to children living in its region which includes Minersville. Early screening, special education services, speech and hearing therapy, autistic support, preschool classes and many other services like driver education are available. Services for children during the preschool years are provided without cost to their families when the child is determined to meet eligibility requirements. Intermediate units receive taxpayer funding: through subsidies paid by member school districts; through direct charges to users for some services; through the successful application for state and federal competitive grants and through private grants.

All content from Kiddle encyclopedia articles (including the article images and facts) can be freely used under Attribution-ShareAlike license, unless stated otherwise. Cite this article:
Minersville, Pennsylvania Facts for Kids. Kiddle Encyclopedia.