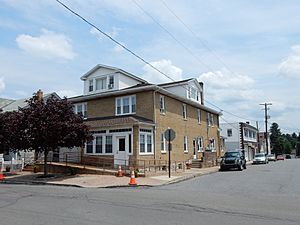 Kelayres, Pennsylvania is a census-designated place in Kline Township, Schuylkill County on Broad Mountain just west of McAdoo. Reservoir Number 8 is just west of Kelayres and drains northward into the Catawissa Creek, a tributary of the Susquehanna River. It is served by the Hazleton Area School District. The local pronunciation of the village is "Clairs" and its zip code is 18231. [1] As of the 2010 census the population was 533 residents. Kelayres is in Area Code 570, served by the 929 McAdoo exchange.

Kelayres achieved national notoriety in 1934 when local politics led to the Kelayres massacre, election eve, November 5. Five were killed, at least a dozen injured. The breaking story was played up for its political angle on election day. Local Republican boss Joseph James Bruno and six members of his immediate family were arrested and tried for the murders. Six received convictions and prison sentences. Bruno again achieved national notoriety when he escaped from jail in December 1936. He was recaptured in August 1937. They were all eventually pardoned, Joseph Bruno being the last of the family pardoned, on December 24, 1947.

All content from Kiddle encyclopedia articles (including the article images and facts) can be freely used under Attribution-ShareAlike license, unless stated otherwise. Cite this article:
Kelayres, Pennsylvania Facts for Kids. Kiddle Encyclopedia.