Coaldale is a borough in Schuylkill County, Pennsylvania, United States. Settled in 1827, it was incorporated in 1906 from part of the former Rahn Township; it is named for the coal industry—wherein, it was one of the principal early industry centers. Coaldale is in the southern Anthracite Coal region in the Panther Creek valley, a tributary of the Little Schuylkill River, along which U.S. Route 209 was eventually built between the steep climb up Pisgah Mountain from Nesquehoning (easterly) and its outlet in Tamaqua, Pennsylvania about five miles to the west.

The town is virtually joined at the hip to nearby Lansford, to its immediate east—as both were founded as company towns on lands owned by and mined by the Lehigh Coal & Navigation Company (LC&N) while technically on opposite sides of the county lines. In truth, the history, business situation, and fortunes of not just the two, but of three towns, the third being the nearby Summit Hill, PA located a few thousand feet upslope were tied in decades of co-development because the LC&N had built the western terminus of the nation's second railroad, the Summit Hill and Mauch Chunk Gravity Railway to ship coal out, and opened multiple mines throughout Coaldale and Lansford and the rest of the Panther Creek Valley in the days when railroads were coming into their own.

The town has a bus stop which has a billboard on one side reading "Everybody's Goal Is Mine More Coal". It was founded by John Moser. The area on the western border of the borough is known as Seek.

Coaldale was historically a coal-mining town wherein the whole region was effectively the property of the Lehigh Coal & Navigation Company. This, the railroads the LC&N put in and a small shirt factory were the main historic industries in Coaldale. Because of the adverse topology, the LC&N took several decades to survey and drive a railbed with a negotiable grade from Mauch Chunk through Nesquehoning, along the Nesquehoning ridge to Hometown, and then up the Panther Creek Valley from Tamaqua. 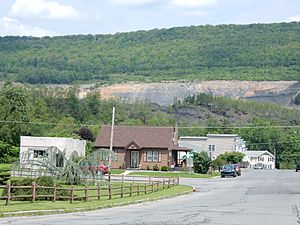 Coaldale is located at 40°49′20″N 75°54′36″W﻿ / ﻿40.82222°N 75.91000°W﻿ / 40.82222; -75.91000 (40.822234, -75.910115), which is (technically) 1 mile southwest of Lansford as both municipalities lie along the border of Carbon and Schuylkill Counties. It is also 5 miles northeast of Tamaqua, 27 miles northwest of Allentown, 9 miles south of Hazleton. It is located on the northwestern fringe of the Lehigh Valley and just two ridgelines away from the nearby Poconos, and drains to the Delaware by way of Panther Creek, the Little Schuylkill River, and the Schuylkill River. Coaldale sits atop one of the richest coal seams in the eastern end of the southern Coal Region, which is still being exploited by a successor company of the LC&N (called the Old Company in the valley), the Lehigh Coal and Navigation Company (or the New Company). Coaldale's elevation is 1050 feet above sea level. According to the United States Census Bureau, the borough has a total area of 2.2 square miles (5.7 km2), all of it land.

Coaldale is served by U.S. Route 209 which runs through neighboring Lansford's business district, serving both municipalities as their main thoroughfare. The borough's terrain is mostly hilly, many of those ancient mine tailings or culm piles, and when not developed, its lands are mostly forested.

There were 1,046 households out of which 22.3% had children under the age of 18 living with them, 40.2% were married couples living together, 11.9% had a female householder with no husband present, and 42.0% were non-families. 38.7% of all households were made up of individuals and 24.4% had someone living alone who was 65 years of age or older. The average household size was 2.14 and the average family size was 2.84.

The building housing Coaldale's town hall and fire department was built in 1907 to the designs of the Wilkes-Barre architect, Owen McGlynn.

All content from Kiddle encyclopedia articles (including the article images and facts) can be freely used under Attribution-ShareAlike license, unless stated otherwise. Cite this article:
Coaldale, Schuylkill County, Pennsylvania Facts for Kids. Kiddle Encyclopedia.