Fisher Run is a tributary of Catawissa Creek in Columbia County, Pennsylvania, in the United States. It is approximately 2.9 miles (4.7 km) long and flows through Main Township and Beaver Township. The stream is impaired by acid mine drainage. It is considered to be a high-quality coldwater fishery and Class A Wild Trout Waters. The watershed of the stream has an area of 3.03 square miles (7.8 km2). 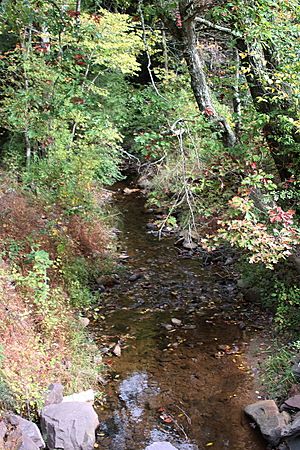 Fisher Run begins on Catawissa Mountain in southwestern Main Township. The stream flows east in a valley and crosses a road within a few tenths of a mile. A short distance later, it turns northeast for well over a mile. It eventually crosses Fisher Run Road and then Iron Bridge Road. Immediately after crossing Iron Bridge Road, the stream turns southeast and enters Beaver Township. In Beaver Township, the stream almost immediately reaches its confluence with Catawissa Creek.

Fisher Run has one unnamed tributary. It is known as "Trib 27549 To Fisher Run".

Fisher Run is considered to be impaired by acid mine drainage and metals. It is one of several streams and creeks in the watershed of Catawissa Creek with this impairment. The pH of the stream is between 6.0 and 6.9. The total concentration of alkalinity is 4 milligrams per liter.

The main soils in the watershed of Fisher Run are the Leck Kill soil, the Hazleton soil, and the Watson soil.

The upper reaches and most of the rest of the watershed of Fisher Run are in Pennsylvania State Game Lands Number 58. However, the stream flows through agricultural land in its lower reaches.

Fisher Run is most likely named after Isaac Fisher.

The Pennsylvania Department of Environmental Protection considers Fisher Run to be a high-quality coldwater fishery. It is also considered by the Pennsylvania Fish and Boat Commission to be Class A Wild Trout Waters between its headwaters and its mouth. The stream is inhabited by brook trout, which also reproduce naturally throughout the stream.

All content from Kiddle encyclopedia articles (including the article images and facts) can be freely used under Attribution-ShareAlike license, unless stated otherwise. Cite this article:
Fisher Run Facts for Kids. Kiddle Encyclopedia.