Davis Run is a tributary of Catawissa Creek in Schuylkill County, Pennsylvania, in the United States. It is approximately 1.2 miles (1.9 km) long. The watershed of the stream has an area of 2.86 square miles (7.4 km2). The stream is considered to be a High-Quality Coldwater Fishery and Class A Wild Trout Waters. Six species of fish inhabit the stream, including brown trout and brook trout. The main rock formations in the stream's watershed are the Mauch Chunk Formation and the Pottsville Formation and the main soils are the Leck Kill soil and the Hezleton soil. The stream has two unnamed tributaries and a lake known as the Pumping Station Reservoir. 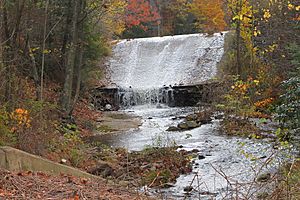 Davis Run begins on the northern edge of Locust Mountain on the southern edge of East Union Township. It flows north for several tenths of a mile before receiving an unnamed tributary and entering a valley. It then turns west for several hundred feet. The stream then turns north-northwest and enters the Pumping Station Reservoir after a few tenths of a mile. In this reservoir, it receives another unnamed tributary. The stream leaves its valley and turns north when it exits the reservoir. Approximately two-tenths of a mile further downstream, it reaches its confluence with Catawissa Creek.

Davis Run is an infertile stream. It has the potential to be affected by acid precipitation. 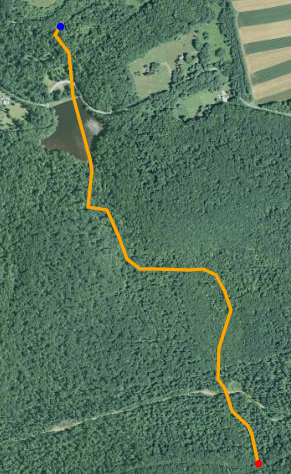 Satellite map of Davis Run. The red dot is the stream's source and blue dot is its mouth.

A mountain known as Locust Mountain is at the headwaters of Davis Run. The stream begins on the mountain's northern side.

There are almost no areas in the watershed of Davis Run that are prone to flooding during a 100-year flood. 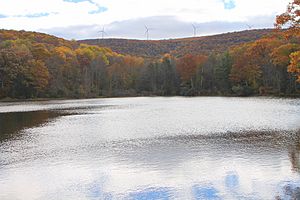 Pumping Station Reservoir from the north

In 1990, the population density of the watershed of Davis Run was 20 people per square kilometer.

The Pumping Station Reservoir on Davis Run is used for recreational purposes. A 1997 report stated that the stream was an excellent site for angling.

All content from Kiddle encyclopedia articles (including the article images and facts) can be freely used under Attribution-ShareAlike license, unless stated otherwise. Cite this article:
Davis Run Facts for Kids. Kiddle Encyclopedia.