Nanticoke is a city in Luzerne County, Pennsylvania, United States. As of the 2010 census, the population was 10,465, making it the third largest city in Luzerne County. It occupies 3.5 square miles of land. The city can be divided into several sections: Honey Pot (northwestern Nanticoke), (northern and central Nanticoke), and Hanover Section (southeastern Nanticoke). It was once an active coal mining community. Today, the 167-acre main campus of Nanticoke is located within the cci 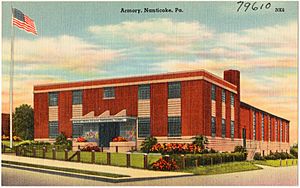 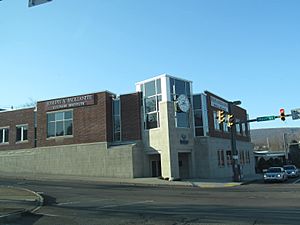 The name Nanticoke was derived from Nantego, the Native American tidewater people who moved here when their Maryland lands were spoiled for hunting by the colonial settlement in 1608.

Nanticoke was incorporated as a village in 1830; Nanticoke was chartered by the Pennsylvania Legislature as a borough on January 31, 1874.

Nanticoke experienced its greatest increase in population between 1917 and 1925 and qualified to become a Third Class City. The citizens voted in the fall of 1924 to form a city government, and elections were held the following year. The new city government consisted of a Mayor and four Councilmen who took office in January 1926, which was the official date of becoming a Third Class City. The first mayor of Nanticoke City was Dan Sakowski.

The Concrete City, built by the Delaware, Lackawanna and Western Railroad's coal division in 1911 to house its workers, is located near the Hanover section of Nanticoke. Abandoned since 1924, it was designated a historic site in 1998, and its remains still stand as a tourist attraction. The original road that used to run to the structures has been bulldozed, though it still remains on maps. There is an alternate entrance route that does not appear on maps. It can be found at the end of Bliss & Mosier St's - Hanover section of Nanticoke

Nanticoke city officials voted unanimously to apply to the state for Act 47, or economically distressed city status, which was granted in 2006. Nanticoke faced a projected $700,000 deficit that year, with revenues flat and falling far behind expenses. 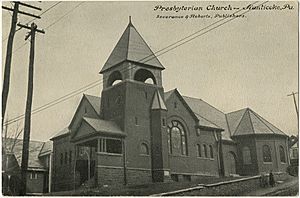 The Anthracite Coal Fields map illustrates the mine operations in and around Nanticoke and Wilkes-Barre in 1858. The extent of the great coal basin is shown in dark grey, and indicates the great bounty of anthracite coal below the surface. Nanticoke can be seen on the far left. 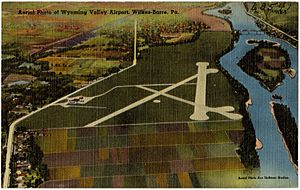 All content from Kiddle encyclopedia articles (including the article images and facts) can be freely used under Attribution-ShareAlike license, unless stated otherwise. Cite this article:
Nanticoke, Pennsylvania Facts for Kids. Kiddle Encyclopedia.