Selinsgrove is the largest borough in Snyder County, Pennsylvania, United States. The population is estimated to be 5,902 for the 2020 Census.

Selinsgrove is geographically located in the middle of the Susquehanna River Valley in Central Pennsylvania, along U.S. Routes 11 and 15, 36.4 miles (58.6 km) north of Harrisburg and 5.7 miles (9.2 km) southwest of Sunbury. It is the home of Susquehanna University.

Selinsgrove was founded in 1787 by Captain Anthony Selin, who fought in the American Revolution.

The Penns Creek Massacre on October 16, 1755, was the first Indian hostility event in the region after General Braddock's defeat in the Seven Year War. A marker on the bank of Penns Creek north of Selinsgrove commemorates the massacre of 14 settlers and the capture of 11 more. In response to this and other Indian actions that day, Fort Augusta, Sunbury, Pennsylvania, the largest of Pennsylvania's frontier forts, was built in 1756 as a result of this conflict.

Selinsgrove Hall and Seibert Hall at Susquehanna University and Gov. Simon Snyder Mansion on Market Street are listed on the National Register of Historic Places.

The presence of Susquehanna University strongly impacts the borough's demographics: 31.1% of the population lives in group quarters - largely dormitories - rather than in households. The student population is also visible in the disproportionate share of 18- to 24-year-olds.

According to the 2013-2017 American Community Survey, median income for a household in the borough was $47,500, and the median income for a family was $54,190. The unemployment rate for residents age 25-64 was 1.8% and the labor force participation rate was 84.1%. About 11% of families and 10% of the population (excluding students) were below the poverty line. However, income and poverty statistics for a community this small are reported with large margins of error and do not cover the student population.

Major Anthony Selin Park located on Sassafras Street is equipped with horseshoe, quoit, and basketball courts and soccer fields. A large covered pavilion for picnics can be reserved for outings and reunions. This facility also offers a kitchen area, restrooms, and game equipment. A “Life Trail”, which is a system of exercise and walking trails, is one feature of the park. Local businesses have donated kiosks that provide information on fitness for active adults. During the summer of 2011, this program offered a sport-camp atmosphere promoting physical activity. Activities will include soccer, baseball, lacrosse, volleyball, basketball, etc. A different sport was featured each week. The program consisted of fitness and sports activities.

Pump House Park and Gazebo The Pump House Park includes a building that can be rented for any meeting, party, or group event. This facility contains restrooms and a kitchen, as well as a meeting space that comfortably seats about 30 people and can be rearranged for as many as 60. The Gazebo is another great feature of the park, located in an attractive setting along Penns Creek. The Gazebo is a popular spot for outdoor weddings, and also hosts a concert series of local performers during June, July, and August. For reservations, call the Borough Office. "Music at the Gazebo" is a program that runs from June through August with free concerts held in Pump House Park.

The East Snyder Park is a multi-use facility which is under development using state grants and local donations. It is located along the upper end of University Ave. near Rt. 522, at the location of the existing Penn Township ball fields. The master plan of the park calls for nine professional grade horseshoe pits, baseball, softball, football and soccer fields, a preschool playground with age appropriate apparatus (Kaboom grant) a playground for older children, and a small wetland conservation education area.

Pennsylvania Fish and Boat Commission maintains boating access to the Susquehanna River on the Isle of Que.

Susquehanna Greenway is a regional effort to link natural, cultural, historic, and recreational resources along the 500-mile (800 km) corridor of the Susquehanna River in Pennsylvania.

A public swimming pool was built in the early 1970s.

The largest local employers are housing-related manufacturers and educational institutions including the public schools and Susquehanna University. Educational services and health care/social assistance combined are projected to be about 90.7% of all job growth by 2014 in the central region. Manufacturing of both non-durable and durable goods are expected to lose over 4,000 jobs (a change of about -9.1% in employment) in the same time period. Construction is the only goods-producing sector projecting job growth, where employment may increase by about 210 jobs (or about 2.1%).

Outside of the community local region employment includes: service jobs in local businesses, area hospitals which include UPMC Susquehanna Sunbury in Sunbury and Evangelical Hospital in Lewisburg. 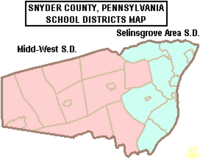 US Routes 11, 15 and 522, along with PA Route 35 pass through Selinsgrove. Intercity bus service is provided between the borough and Harrisburg to the south and Williamsport and Elmira, New York to the north by Fullington Trailways.

All content from Kiddle encyclopedia articles (including the article images and facts) can be freely used under Attribution-ShareAlike license, unless stated otherwise. Cite this article:
Selinsgrove, Pennsylvania Facts for Kids. Kiddle Encyclopedia.