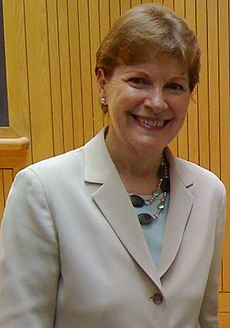 Cynthia Jeanne Bowers (also Jeanne Shaheen; born January 28, 1947) is an American politician She is a member of the U.S. Democratic Party.

In 1996, Shaheen became the first woman to be elected Governor of New Hampshire.

In 2008, Shaheen was elected to the United States Senate. Since 2011, she has been the senior senator from New Hampshire.

All content from Kiddle encyclopedia articles (including the article images and facts) can be freely used under Attribution-ShareAlike license, unless stated otherwise. Cite this article:
Jeanne Shaheen Facts for Kids. Kiddle Encyclopedia.