Saxton is a borough in Bedford County, Pennsylvania, United States. The population was 736 at the 2010 census.

Saxton is bordered to the west by the unincorporated community of Stonerstown. Pennsylvania Route 913 passes through Saxton, leading west through Stonerstown and across the Raystown Branch to end at Pennsylvania Route 26, and leading east to Broad Top City atop the plateau. By PA-26 it is 22 miles (35 km) south to Everett and 27 miles (43 km) north to Huntingdon.

According to the United States Census Bureau, Saxton has a total area of 0.41 square miles (1.05 km2), all of it land. 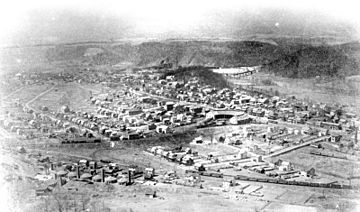 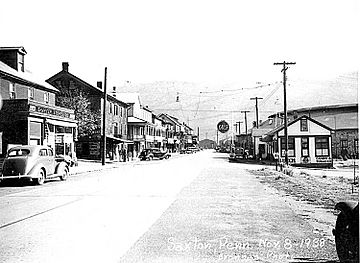 Saxton was once a thriving town of several thousand people. Officially founded in 1855 by James Saxton, the area now known as Saxton has been inhabited for centuries. Before Anglos arrived, Native Americans camped along the river that flows through the area. As the United States grew and pushed the frontier west, a few settlers began building homesteads, farms, and mills throughout the valley that Saxton is located in. The region being rich in bituminous coal, a railroad was soon built to export the commodity. Saxton was the hub of the Huntingdon and Broad Top Railroad (H&BT) and for almost 100 years it shipped coal from Saxton to places like Bedford, Huntingdon and Everett. From there it went on to industrial centers, such as Pittsburgh or Baltimore.

The thriving railroad attracted thousands of workers and their families to the town and surrounding area. In its heyday Saxton had a bowling alley, a toy factory, a candy factory, a coal power plant, dozens of shops and businesses, and even a 7 Up bottling plant. Saxton and the surrounding area were full of industry and other businesses. These included a pig iron furnace, coke ovens, a tannery, brickyards, dairies, and others. However, the prosperity would not last, as the mines began to become exhausted of coal after World War Two. This in conjunction with the recession of 1949 caused the railroad to shut down in 1955. Most of the buildings and infrastructure owned by the railroad were abandoned, and has subsequently been salvaged or left to erode away.

Saxton was chosen to be the home of the Saxton Nuclear Generating Station, the nation's fourth nuclear power plant, which was commissioned in 1961. It was one of the first test facilities for peace-time plutonium use, as well as cooling methods that would be used to relieve meltdown situations such as the Fukushima Daiichi nuclear disaster in 2011. The facility was decommissioned in 1972, and the radioactive core removed in 2005.

There were 357 households, out of which 27.5% had children under the age of 18 living with them, 39.8% were married couples living together, 14.3% had a female householder with no husband present, and 40.1% were non-families. 37.0% of all households were made up of individuals, and 22.4% had someone living alone who was 65 years of age or older. The average household size was 2.24 and the average family size was 2.84.

According to the 2010-2014 American Community Survey, Saxton household income demographics reflect 57.1% of all households earn less than $50,000 annually.

All content from Kiddle encyclopedia articles (including the article images and facts) can be freely used under Attribution-ShareAlike license, unless stated otherwise. Cite this article:
Saxton, Pennsylvania Facts for Kids. Kiddle Encyclopedia.