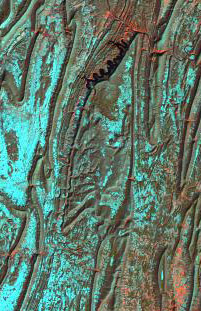 Pennsylvania State Game Lands 67, 121, and 267 lie on Broad Top. Part of Rothrock State Forest lies on Broad Top as well, as is most of Trough Creek State Park in Huntingdon County.

Although Broad Top lies within the Ridge and Valley Physiographic Province, it is actually more similar to the Allegheny Plateau due to its flat-lying rocks and stratigraphic similarity to rocks there.

Bituminous coal has been mined in the Broad Top area, and the coal field is known as the Broad Top Field. Nearly all of the coal lies within the Allegheny Formation.(PA Geologic Survey Map 11). Abandoned mines exist in the area and acid mine drainage is an environmental problem, where several fishless streams exist as a result of the discharge from the abandoned mines. [1].

All content from Kiddle encyclopedia articles (including the article images and facts) can be freely used under Attribution-ShareAlike license, unless stated otherwise. Cite this article:
Broad Top Facts for Kids. Kiddle Encyclopedia.