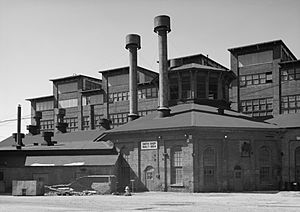 Cambria County is a county located in the U.S. state of Pennsylvania. As of the 2010 census, the population was 143,679. Its county seat is Ebensburg. The county was created on March 26, 1804, from parts of Bedford, Huntingdon, and Somerset Counties and later organized in 1807. It was named for the nation of Wales, which in Latin is known as "Cambria".

There are two Pennsylvania state parks in Cambria County. 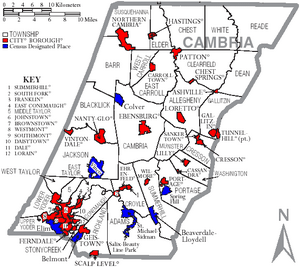 Under Pennsylvania law, there are four types of incorporated municipalities: cities, boroughs, townships, and, in at most two cases, towns. The following cities, boroughs and townships are located in Cambria County:

The population ranking of the following table is based on the 2010 census of Cambria County. 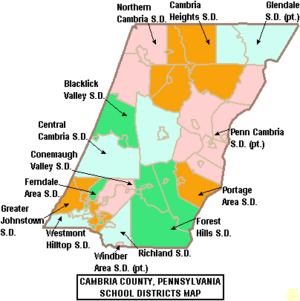 There are also 11 public, cyber charter schools in Pennsylvania that are available for free statewide, to children K-12. See: Education in Pennsylvania.

According to the Pennsylvania Department of Education's Ed Names and Addresses, July 1, 2015

All content from Kiddle encyclopedia articles (including the article images and facts) can be freely used under Attribution-ShareAlike license, unless stated otherwise. Cite this article:
Cambria County, Pennsylvania Facts for Kids. Kiddle Encyclopedia.