Westmont is a borough in Cambria County, Pennsylvania, United States. It is part of the Johnstown, Pennsylvania Metropolitan Statistical Area. The population was 5,181 at the 2010 census, down from 5,523 at the 2000 census.

Westmont is located in southwestern Cambria County and is bordered to the east by the city of Johnstown, to the north by the borough of Brownstown, and to the south by the borough of Southmont and the unincorporated community of Elim. Westmont sits on heights rising up to 700 feet (210 m) above the Stonycreek and Conemaugh River valleys in the center of Johnstown.

According to the United States Census Bureau, the borough of Westmont has a total area of 2.4 square miles (6.1 km2), all of it land.

Before the Johnstown Flood of 1889, the Yoder Hill area consisted of nothing more than a few farms, accessible by only a few steep, muddy roads. However, since the flood was so devastating to the city and to its major employer, the Cambria Iron Company, the iron company decided to develop the top of the hill as a suburb for its top personnel to live in. The company commissioned the famous landscape architect, Charles Miller, to lay out the grid for the settlement of "Tiptop", later renamed Westmont. Westmont was located on a ridge high above the valley in which Johnstown is located, and thus in a place of safety. As such, it was also above the smoke, noise, and stench of the city, and attracted the well-to-do of the town, eager to escape what (in many cases) their own factories had wrought. An inclined railway, the Johnstown Inclined Plane, was built for easy travel to the city. With the problem of transportation solved, the new settlement began to grow, and it was incorporated as the Borough of Westmont on June 13, 1892. In 1935, the borough bought the inclined railway from Bethlehem Steel.

In 1938 the Johnstown Traction Company began to operate bus service to Westmont via buses that rode up and down the Inclined Plane. At one time there were plans to extend the Southmont streetcar line from its terminus at Diamond Boulevard and Menoher Boulevard along Diamond Boulevard to Luzerne Street, and then along Luzerne Street in the center median to Colgate Avenue. This rail service extension was never constructed, and streetcar service on the Southmont line was discontinued in 1954 when a rock slide along Southmont Boulevard damaged the track and overhead. Following completion of the "Easy Grade" highway of Menoher Boulevard (PA Route 271) from downtown Johnstown through to Westmont, bus service was transferred to this route and service via the Inclined Plane was discontinued.

Because of its upland location, Westmont escaped destruction in the subsequent floods that damaged flood-prone Johnstown.

The Westmont Historic District was listed on the National Register of Historic Places in 1995. 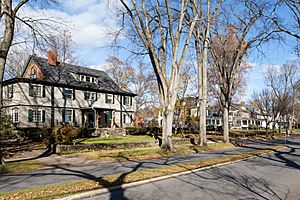 Westmont continues to be a town of significant attractive, large, old houses. The present population of Westmont is approximately 5,000 residents.

Westmont is currently governed by the "Weak Mayor-Council" form of government. There are seven council members and a mayor who are elected by the voters for four-year staggered terms. The mayor votes only in case of a tie. The borough council determines municipal policy, enacts laws, approves borough officials, etc. Daily operations are supervised by the borough secretary and the public works director.

Westmont has a volunteer fire company and an ambulance service. Police protection is provided by the West Hills Regional Police Department.

Today Westmont, even though considerably larger than that envisioned by the Cambria Iron Company officials, still retains many of the characteristics that attracted residents here in the first place. It is, for the most part, still a quiet, tree-lined community. One can see joggers, walkers and children throughout the community at all times of the day. Borough restrictions against commercial enterprise are still enforced.

All content from Kiddle encyclopedia articles (including the article images and facts) can be freely used under Attribution-ShareAlike license, unless stated otherwise. Cite this article:
Westmont, Pennsylvania Facts for Kids. Kiddle Encyclopedia.