The Cambria Iron Company of Johnstown, Pennsylvania was a major 19th-century industrial producer of iron and steel. Founded in 1852, it had the nation's largest steel foundry in the 1870s, and was renamed the Cambria Steel Company in 1898. The company used many innovations in the steelmaking process, including those of William Kelly and Henry Bessemer. The company was acquired in 1923 by the Bethlehem Steel Company. The company's historic facilities, extending some 12 miles (19 km) along the Conemaugh and Little Conemaugh Rivers, are a National Historic Landmark District.

A number of works by the firm are listed on the National Register of Historic Places.

The industrial facilities of the Cambria occupied five separate sites in and around Johnstown, Pennsylvania. Its earliest facilities, known as the Lower Works, are located on the east bank of the Conemaugh River, north of downtown Johnstown and the Little Conemaugh River. The Gautier Plant is just northeast of downtown Johnstown on the south side of the Little Conemaugh. Further up that River are the extensive Franklin Plant and Wheel Plant, while the Rod and Wire Plant is located on the west side of the Conemaugh River a ways north of the Lower Works. Each of these facilities represents a different phase of development and growth of the steel industry, although the Lower Works no longer has significant traces of the earliest facilities used in steel manufacturing. All five of these areas make up the National Historic Landmark District designated in 1989. 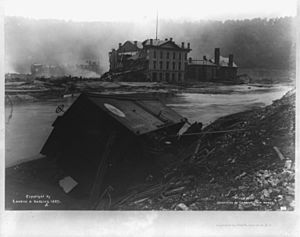 Warehouse of Cambria Iron Works after the 1889 Johnstown Flood.

The Cambria Iron Company was founded in 1852, to provide steel for the construction of railroads. The company grew rapidly, and was, by the 1870s, a leading producer of steel and an innovator in the advancement of steel-making technology. It performed early experiments with the Kelly converter, built the first blooming mill, and was one of the first plants to use hydraulics for the movement of ingots. It built one of the first plants to use the Bessemer process for making steel at a large scale. Innovations by the company and, its methods and processes, were widely influential throughout the steel industry.

The company was at its height in the 1870s, under the long-term leadership of general manager Daniel Johnson Morrell, who had overseen the works expansion into one of the largest producers of rails in the United States, helping to end dependence on British railroad construction imports. He was a member of the 40th United States Congress and 41st United States Congress.

The Johnstown Flood of May 31, 1889 was caused by the catastrophic failure of the South Fork Dam, killing more than 2,200 people; it was then the largest disaster in U.S. history. The flood badly damaged the company's facilities. Cambria Iron Company reopened on June 6, 1889, and continued to operate independently, though eclipsed in size by other producers, following the flood. 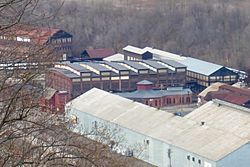 Morrell had become a member of South Fork Fishing and Hunting Club, site of the South Fork Dam, which formed Lake Conemaugh, in order to monitor the dam in its care, and campaigned to club officials to improve the safety of the dam, the failure of which eventually caused the flood. Morrell insisted on inspections of the dam's breastwork by his own engineers and by those of the Pennsylvania Railroad, but his warnings went unheeded, and his offer to effect repairs, partially at his own expense, was rejected by club president Benjamin F. Ruff, who died two years prior to the flood. Morrell, too, died four years prior to the Johnstown Flood; his membership was then bought by his colleague, Cambria Iron Company chief legal counsel Cyrus Elder. Elder, a former news editor, was the only Johnstown native who was a member of the club, and lost his wife and a daughter in the flood. He was and remained a notable civic leader, and authored books and poetry.

In 1916, the company was acquired by Midvale Steel and Ordnance Company. Midvale sold the company to Bethlehem Steel in 1923, and it operated continuously until 1992.

Infrastructure whose parts were manufactured by the Cambria Company include (with variations in attribution):

All content from Kiddle encyclopedia articles (including the article images and facts) can be freely used under Attribution-ShareAlike license, unless stated otherwise. Cite this article:
Cambria Iron Company Facts for Kids. Kiddle Encyclopedia.