The South Fork Fishing and Hunting Club was a Pennsylvania corporation which operated an exclusive and secretive retreat at a mountain lake near South Fork, Pennsylvania, for more than fifty extremely wealthy men and their families. The club was the owner of the South Fork Dam, which failed during an unprecedented period of heavy rains, resulting in the disastrous Johnstown Flood on May 31, 1889.

It was the worst disaster event in U.S. history at the time, and relief efforts were among the first major actions of Clara Barton and the newly organized American Red Cross, which she had founded and led. The death toll from the 1889 flood was approximately 2,209.

Despite some years of claims and litigation, the club and its members were never found to be liable for monetary damages. The corporation was disbanded in 1904, and the real estate assets were sold by the local sheriff at public auction, largely to satisfy a pre-existing mortgage on the large clubhouse.

The South Fork Dam was an earthen dam originally built between 1838–1853 by the Commonwealth of Pennsylvania as part of the Pennsylvania Main Line canal system to be used as a reservoir for the canal basin in Johnstown. It was abandoned by the commonwealth, sold to the Pennsylvania Railroad, and then sold again to private interests.

In 1880, at the suggestion of entrepreneur Benjamin Franklin Ruff, the newly organized club purchased an old dam and abandoned reservoir from Ruff which he had purchased from former Congressman John Reilly. Ruff envisioned a summer retreat in the hills above Johnstown. He promoted this idea to Henry Clay Frick, a friend of his, who was one of the wealthy elite group of powerful men who controlled Pittsburgh's steel, rail and other industries.

Lake Conemaugh, which was about two miles (3 km) long, approximately one mile (1.6 km) wide, and 60 feet (18 m) deep near the dam, was named by the new club. The lake had a perimeter of seven miles (11 km) and could hold 14.3 million tons of water. When the water was "up" in the spring, the lake covered over 400 acres (1.6 km²). The South Fork Dam was 72 feet (22 m) high and 931 feet (284 m) long. Despite being both well-designed and well-built when new, it failed for the first time in 1862, and a history of negligent maintenance and alterations were later believed to have contributed to its failure on May 31, 1889. Between 1881 when the club was opened and 1889, this dam frequently sprang leaks and was patched, mostly with mud and straw.

Major flaws regarding the dam

Before closing on Ruff's purchase, Congressman Reilly had crucial discharge pipes removed and sold for their value as scrap metal, so there was no practical way to lower the level of water behind the dam should repairs be indicated. Ruff, while he was not a civil engineer, had a background that included being a railroad tunnel contractor and supervised the repairs to the dam, which did not include a successful resolution of the inability to discharge the water and substantially lower the lake for repair purposes.

The five cast iron discharge pipes, each with an inside diameter of two feet, had previously allowed a controlled release of water. When the initial renovation was completed under Ruff's oversight, it became impossible to drain the lake to repair the dam properly, having modified the dam and lake area it to suit its recreational interests. Most significantly, in order to provide a carriageway across the dam, the top was leveled off, lowering it, where it sat above the town of Johnstown, leaving it only a few feet above the water level at its lowest point. To compound the problem, the club owners and managers had erected fish screens across the mouth of the spillway which was intended to keep water from accumulating to the point of straining the dam; the screens became clogged with debris, restricting the outflow of water.

Daniel Johnson Morrell became a member of the club for the purpose of observing the state of the dam under its stewardship, and campaigned to club officials, especially to Ruff, its founder, regarding the safety of the dam. Morrell insisted on inspections of the dam's breastwork both by his own engineers, (including John Fulton) and by those of the Pennsylvania Railroad. Morrell's warnings went unheeded, and his offer to effect repairs, partially at his own expense, was rejected by club president, Benjamin F. Ruff (who died two years prior to the flood). Morrell joined the Club to further express his concerns. Morrell died four years before the flood he had labored to prevent.

The dam had not failed completely since 1862. Notwithstanding leaks and other warning signs, the flawed dam held the waters of Lake Conemaugh back until disaster struck, in May 1889. The president at the time of the flood was Colonel Elias Unger. The founding entrepreneur, Benjamin F. Ruff, had died several years earlier, and Unger had been on the job only a short time.

The American Society of Civil Engineers launched an investigation of the South Fork Dam breach immediately after the flood. However, according to modern research conducted by, among others, University of Pittsburgh instructor Neil M. Coleman, the report was delayed, subverted, and whitewashed, before being released two years after the disaster. A detailed discussion of the 21st-century investigation, its participating engineers, and the science behind the 1889 flood was published, in 2018, as Johnstown's Flood of 1889 - Power Over Truth and the Science Behind the Disaster. 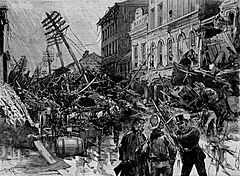 After the Flood at Johnstown -- Main Street

After several days of unprecedented rainfall in the Alleghenies, the dam gave way on May 31, 1889. A torrent of water raced downstream, destroying several towns. When it reached Johnstown, 2,209 people were killed, and there was $17 million ($473 million in 2020 terms) in damage. The disaster became widely known as the Johnstown Flood, and locally known as the "Great Flood".

Rumors of the dam's potential for harm, and its likelihood of bursting, had been circulating for years, and perhaps this contributed to why they were not taken seriously on that fateful day. For whatever reason, at least three warnings sent from South Fork to Johnstown by telegram the day of the disaster went virtually unheeded downstream.

When word of the dam's failure was telegraphed from South Fork by Joseph P. Wilson to Robert Pitcairn in Pittsburgh; Frick and other members of the Club gathered to form the Pittsburgh Relief Committee for tangible assistance to the flood victims as well as determining to never speak publicly about the Club or the Flood. This strategy was a success, and club members and attorneys Philander C. Knox and James H. Reed were able to fend off four lawsuits against the Club; Colonel Unger, its president; and against 50 named members. Each case was "either settled or discontinued and, as far as is known, no one bringing action profited thereby."

In the years following this tragic event, many people blamed the members of the South Fork Fishing and Hunting Club for the tragedy, as they had originally bought and repaired the dam to turn the area into a holiday retreat in the mountains. However, they failed to properly maintain the dam, and as a result, heavy rainfall on the eve of the disaster meant that the structure was not strong enough to hold the excess water. Despite the evidence to suggest that they were very much to blame, the Club membership was never held legally responsible for the disaster. Knox and Reed successfully argued that the dam's failure was a natural disaster which was an Act of God, and no legal compensation was paid to the survivors of the flood; The perceived injustice aided the acceptance of “strict, joint, and several liability,” so that a “non-negligent defendant could be held liable for damage caused by the unnatural use of land.”

Individual members of the club did contribute substantially to the relief efforts. Along with about half of the club members, Henry Clay Frick donated thousands of dollars to the relief effort in Johnstown. After the flood, Andrew Carnegie, one of the club's better-known members, built the town a new library. In modern times, this former library is owned by the Johnstown Area Heritage Association, and houses the Flood Museum.

On February 5, 1904, the Cambria Freeman reported, under the headline "Will Pass Out of History":

The South Fork Hunting and Fishing Club, owners of the Conemaugh Reservoir at the time of the Great Flood, will soon pass out of history as an organization with the sale of all its personal effects remaining in the clubhouse at the reservoir site. Auctioneer George Harshberger has announced that the sale will take place on Thursday, the 25th inst., at the clubhouse, when the entire furnishings will be disposed of at auction.

In the list to be disposed of are fifty bedroom suites, many yards of carpet, silverware and table ware with the club monogram engraved thereon and many odd pieces of furniture and bric-a-brac. At the time of the Great Flood the club house was handsomely furnished and was fully equipped to care for at least 200 guests. During the summer of 1889 the clubhouse remained open but has since been occupied only by a caretaker.

The Johnstown Flood National Memorial sought stewardship of the club property to "significantly increase the park's capability to interpret the important events surrounding the Johnstown Flood and the individuals associated with it." The South Fork Fishing and Hunting Club Historic District was designated a national historic district listed on the National Register of Historic Places, in 1986. The district includes eight contributing buildings remaining from the club. The district includes the club house and six cottages. They are representative of popular late-19th century architectural styles, including Stick/Eastlake, Gothic Revival, and Queen Anne.

All content from Kiddle encyclopedia articles (including the article images and facts) can be freely used under Attribution-ShareAlike license, unless stated otherwise. Cite this article:
South Fork Fishing and Hunting Club Facts for Kids. Kiddle Encyclopedia.