Kids Encyclopedia Facts
For the Welsh village with a similar name, see Nantyglo.

Nanty Glo is a borough in Cambria County, Pennsylvania, United States. It is part of the Johnstown, Pennsylvania Metropolitan Statistical Area. The population was 2,734 at the 2010 census. The name comes from the Welsh Nant Y Glo, meaning "The Ravine (or "Brook") of Coal." 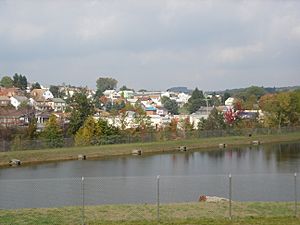 A small section of Nanty Glo seen beyond "Lake Heisley". The pond, part of a mine water reclamation project, occupies part of what was once the above-ground works of Heisley Mine.

What is now Nanty Glo borough originated in the 1890s and was called "Glenglade." By 1896, the community was a lumber camp of 13 houses built on both sides of the southern branch of Blacklick Creek, which forms the border of Blacklick Township on the north side and Jackson Township on the south side.

A post office opened for Glenglade on November 21, 1894, with Merton A. Davis as the first postmaster. Three Davis brothers took turns as postmaster: Merton A., from 1894 until 1900; Montell, 1900 until 1911, and Everett C., 1911–1916. According to oral history, the town name was changed to "Nant-y-glo" during the term of Montell Davis, through the intervention of his wife. Glenglade became Nant-y-glo on February 20, 1901. Whether the Davises had the small town of the same name in Wales in mind or just thought the melodic-sounding Welsh phrase fit the town is not known. The name of "Blacklick" for the creek that bisects the town and the adjacent township probably means much the same as "brook of coal", a lick being a common synonym for brook and the "black" referring to outcroppings of coal seams on the stream banks and bed.

By 1899 the huge coal deposits in the settlement had attracted additional settlers, and the Pennsylvania Railroad installed a spur line through the community that year. Commercial mining was initiated in 1896 by Dr. James W. Dunwiddie of Pine Flats, Indiana County, who opened up what was then called Nanty Glo No. 1.

Heisley Mine (1915) was by far the largest, most profitable, and longest-lived Nanty Glo mine. It was originally owned and operated by Coleman-Weaver Company as Heisley Mine No. 3 until 1922, when Coleman-Weaver dissolved and partner John Heisley Weaver, a Philadelphia industrialist, acquired sole ownership. Colman-Weaver Company also originally owned the mines in Revloc and Colver and launched the Cambria and Indiana Railroad (C&I), which served most Cambria County mines through most of the 20th century. Weaver also owned the mines in Heilwood, Indiana County, which was renamed from Possum Glory to Heilwood after Weaver's nickname, "Heil", from Heisley. Weaver died in 1934, and his company sold Heisley to Bethlehem Mines in 1948. Bethlehem renamed the mine Monroe Mine No. 131 and later renamed it Bethelehem Mine 31 and moved its main entrance from Nanty Glo to Jackson Township (Leidy Portal). The mine closed in the 1980s.

Other mines in what is now Nanty Glo and their starting dates included Lincoln (1900); Springfield, owned by the Peale, Peacock and Kerr Company (1907); Emma Coal Company (1909); and Webster, later owned by the Pennsylvania Coal & Coke Company, Ivory Hill, and the Warren Colliery. "House coal" mines on a much smaller scale (selling coal by the truckload directly to homeowners for house heating) included Lorraine, Bech, Johnson, Cornely, Dorsch, Yobbagy, and Ebandjieff.

Formal education came to Nanty Glo about 1898 with a school opening on what was then the Jackson side of the settlement. Later, a school was opened on the Blacklick or northerly side of the creek. Over the years, there were numerous one-room school houses, and in 1918 a fourth-class school district was established. The first four-year high school class was graduated in 1925. In 1957 the school district merged with that of nearby Vintondale, and in 1967 Blacklick Township became part of a triple jointure to form the present Blacklick Valley School District. The Blacklick Valley Junior-Senior High School (grades seven through 12) is at 555 Birch Street, Nanty Glo. The Blacklick Valley Elementary Center (pre-kindergarten through grade six) is at 1000 W. Railroad, Nanty Glo.

The first house of worship in Nanty Glo was the Methodist Episcopal Church, now United Methodist, established in 1901. Other places of worship in the community, past and present, include St. Mary's Roman Catholic (1902), First Baptist (1913), St. Nicholas Byzantine Catholic (1919), Church of God (1920), Christian & Missionary Alliance and Holy Ascension Ukrainian Orthodox (1921), Church of the Brethren (1922) and Church of the Nazarene (1935). In the 1920s, a Kingdom Hall of Jehovah's Witnesses, a Finnish Lutheran Church, and a Jewish synagogue were started, all three of which no longer exist.

Over the years, Nanty Glo had several hotels, including the Home, St. James, Commercial, and Jackson. At one time Nanty Glo had three movie houses, two of which have been destroyed by fires. The third, the Liberty, is now being remodeled as the Blacklick Valley's historical museum.

In addition to coal mining, Nanty Glo had at various times a chemical works, soft drink bottling plant, plastic factory, and a dress manufacturing firm. All of these industries, along with all of the underground mines, have ceased operation.

Nanty Glo was incorporated as a borough in 1918, taking in parts of Blacklick Township and Jackson Township. After the city of Johnstown, Nanty Glo was the largest municipality in Cambria County, with a population of over 5,000, for most of the 20th century.

Two newspapers have served the borough during its history. In late 1920 or early 1921, a small publication called the Nanty Glo Bulletin was published. That paper was purchased by Herman Sedloff, a Russian emigre working as a typesetter in New York who moved to Nanty Glo specifically to establish a labor-oriented weekly newspaper. He published the first edition of the Nanty Glo Journal on May 5, 1921, and continued as its publisher until his retirement in the 1960s. The Journal continues to serve under new ownership.

It was established as a not-for-profit and free-to-use community website in 1997 by Jon Kennedy, a local native who began writing for the Journal while in high school and was its editor from 1962 to 1964 while attending Johnstown College (now UPJ). The website continues to serve the community with thousands of discrete pages, one of the earliest blogs established on the World Wide Web, and several hundred film and video clips. It is now kept in trust for the local historical and museum society.

In 1913, the Nanty Glo Volunteer Fire Company was chartered. That same year, a hand-drawn hose cart with 500 feet (150 m) of hose was purchased by the town's governing body, and the fire company remains strong to the present time, having an enrollment now of over 100 members. A ladies' auxiliary to the fire company was organized in 1927 by 44 women of the community.

It was launched in 1980. After outgrowing several earlier locations, it now occupies a spacious former store building at 942 Roberts Street.

The Nant-Y-Glo Tri-Area Museum and Historical Society was established in May, 2000, to serve Nanty Glo Borough, Blacklick Township, Jackson Township, and Vintondale. The former Liberty Theater building has been acquired and is now being refurbished to display historical artifacts of the Blacklick Valley. In 2012 the Society acquired the former Nanty Glo News (previously, Hawksworth Hardware) Building and refurbished it as the Liberty Cafe, a nonprofit enterprise supporting the Historical Society. Jim Toth is the project manager and treasurer.

Just one mile north of U.S. Highway 22, Nanty Glo is the major entry point to the Ghost Town Trail, a biking and walking trail that traverses much of Cambria County and adjacent Indiana County along former railroad beds. Free parking is available next to the trail entrances on both sides of the Fire Hall in the town center.

The Liberty Museum is nearing completion at the former Liberty Theater at the intersection of Shoemaker and Roberts streets.

Nanty Glo has close links with its twinned sister town of Nantyglo in Wales.

All content from Kiddle encyclopedia articles (including the article images and facts) can be freely used under Attribution-ShareAlike license, unless stated otherwise. Cite this article:
Nanty Glo, Pennsylvania Facts for Kids. Kiddle Encyclopedia.