Kids Encyclopedia Facts
For counties in the state of Indiana, see List of counties in Indiana.

Indiana County is a county located in the West central part of the U.S. state of Pennsylvania. As of the 2010 census, the population was 88,880. Its county seat is Indiana. Indiana County comprises the Indiana, PA Micropolitan Statistical Area, which is also included in the Pittsburgh-New Castle-Weirton, PA-WV-OH Combined Statistical Area.

Prior to the American Revolutionary War, some settlers proposed this as part of a larger, separate colony to be known as Vandalia, but opposing interests and the war intervened. Afterward, claims to the territory by both the states of Virginia and Pennsylvania had to be reconciled. After this land was assigned to Pennsylvania by the federal government according to the placement of the Mason–Dixon line, Indiana County was created on March 30, 1803, from parts of Westmoreland and Clearfield counties and was formally organized in 1806. 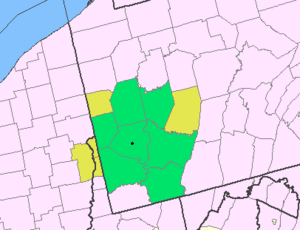 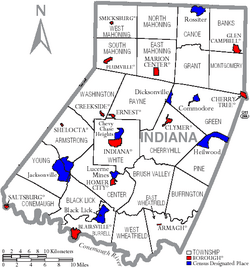 Under Pennsylvania law, there are four types of incorporated municipalities: cities, boroughs, townships, and, in at most two cases, towns. The following boroughs and townships are located in Indiana County:

The population ranking of the following table is based on the 2010 census of Indiana County. 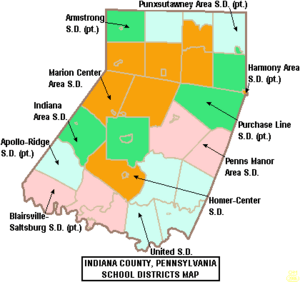 All content from Kiddle encyclopedia articles (including the article images and facts) can be freely used under Attribution-ShareAlike license, unless stated otherwise. Cite this article:
Indiana County, Pennsylvania Facts for Kids. Kiddle Encyclopedia.