Prince Gallitzin State Park is a 6,249-acre (2,529 ha) Pennsylvania state park with acreage in both Chest and White Townships in Cambria County of North Central Pennsylvania in the United States, near both Gallitzin Borough, & Gallitzin Township in the greater Altoona, Pennsylvania area.

The park is home to Glendale Lake a 1,635 acres (662 ha) man-made lake. It has a large campground with campsites on the lake shore. Prince Gallitzin State Park was named in honor of Prince Demetrius Gallitzin, a Russian nobleman turned Roman Catholic missionary priest who founded the nearby town of Loretto. The park is just off Pennsylvania Routes 253 and 53 just east of Patton.

Demetris Gallitzin was born on December 22, 1770, at The Hague in the Netherlands. His name is a form of Galitzine, the Russian princely family in which he was born. His father, Dimitri Alexeievich Galitzine (1735-1803), Russian ambassador to the Netherlands, was an intimate friend of Voltaire and a follower of Diderot; so, too, for many years was his mother, Countess Adelheid Amalie Gallitzin (1748-1806), until a severe illness in 1786 led her back to the Roman Catholic Church, in which she had been raised.

At the age of 17, Demetrius was received into the Roman Catholic Church. He then served as an aide-de-camp to the commander of the Austrian troops in Brabant; but, following the assassination of the king of Sweden, he, like all other foreigners, was dismissed from the service.

Gallitzin left Europe for the United States in 1792 where he landed in Baltimore. It was soon after his arrival that he decided to enter the priesthood. He was ordained in March 1795 and was one of the first Roman Catholic priests ordained in America. After several years serving as a missionary in southern Pennsylvania and Maryland, Father Gallitzin founded the settlement of Loretto, Pennsylvania, in what is now Cambria County, Pennsylvania in 1799. Loretto was an expansion of a smaller settlement established by Michael McGuire in 1788. When McGuire died in 1793, he donated "McGuire's Settlement" to the Catholic Church in America for the establishment of a Catholic community. 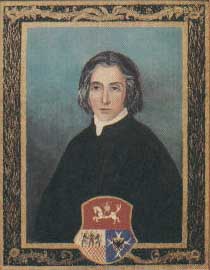 With Gallitzin's leadership, Loretto became the first English-speaking Roman Catholic settlement in the United States west of the Allegheny Front. In addition to McGuire's patrimony, Gallitzin is believed to have spent $150,000 (USD) of his own funds later, to purchase some additional 20,000 acres (8,100 ha), which it is said he gave or sold at low prices to newly arriving Catholic settlers. Father Gallitzin worked to build Loretto by establishing a gristmill, tannery, and sawmill in the town. He also was instrumental in the education of the children of the area and served as a doctor, banker and lawyer for many of the citizens of Loretto.

Gallitzin died at Loretto on May 6, 1840, and was buried near St. Michael's church in Loretto. Father Gallitzin has been honored in the places names of several locations in Pennsylvania, including Gallitzin, Gallitzin Springs and Prince Gallitzin Spring. Locally he is sometimes referred to as "the priest who may have been a tzar". On June 6, 2005, it was announced that Gallitzin had been named a Servant of God by the Congregation for the Causes of Saints, the first step on the path toward possible future sainthood.

Establishment of the park

Establishing a park near Patton was first discussed during the Great Depression of the 1930s. The National Park Service discussed plans for opening a Recreation Demonstration Area just to the east of Patton on Beaverdam Run. The project was proposed and approved but was never put into place.

The subject of building a park came up again in 1955. The Patton Chamber of Commerce proposed building a dam in the Killbuck area. They met with Maurice K. Goddard who was at the time the secretary of the Pennsylvania Department of Forests and Waters, a forerunner to the Pennsylvania Department of Conservation and Natural Resources. The idea was approved and on April 4, 1957, Governor George M. Leader announced plans for the construction of the park. The park was funded by monies gained from oil and natural gas leases. Central to the park plans was the building of Glendale Dam and the formation of Glendale Lake. Groundbreaking at the park was held on May 3, 1958, and the lake began to fill on December 2, 1960. The park was finally dedicated on May 29, 1965, by Governor William Scranton. 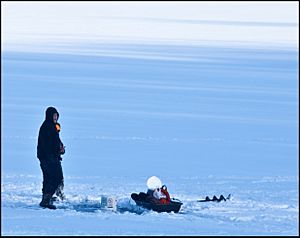 Prince Gallitzin is the home to several different types of outdoor recreation. Glendale Lake is open to swimming, fishing and boating. There are 12 miles (19.31supkm) of trails open for hiking and in some locations equestrian, mountain biking, and snowmobiling. There are over 1,000 picnic tables at the park. Visitors interested in staying over night can use one of 437 campsites or rent one of the 10 cabins at Prince Gallitzin State Park.

Glendale Lake is a major boating destination along the Allegheny Front. Boats up to 20 horsepower are permitted on the lake. Nine boat launches and two marinas are at Glendale Lake. Services provided at the marinas include boat rental, boat repair, and fuel sales. All boats must have a current registration from any state or a launch permit from the Pennsylvania Fish and Boat Commission. Glendale Lake is a warm-water fishery. The common game fish are pike, muskellunge, bass, perch, crappie, and bluegill. Bow fishing is permitted at Prince Gallitzin State Park. The beach at Glendale Lake is open from late May until mid-September. Lifeguards are not posted, so swimming is at one's own risk.

Hunting is permitted at Prince Gallitzin State Park. Hunters are expected to follow the rules and regulations of the Pennsylvania Game Commission. The common game species are squirrels, turkey, white-tailed deer, ruffed grouse, and rabbits. The hunting of groundhogs is prohibited. 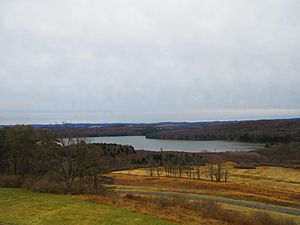 View of a portion of the lake and surrounding woodlands from the observation deck on top of a water tower.

The trailhead for most of the hiking trails is located near the campground along Crooked Run.

The following state parks are within 30 miles (48 km) of Prince Gallitzin State Park:

All content from Kiddle encyclopedia articles (including the article images and facts) can be freely used under Attribution-ShareAlike license, unless stated otherwise. Cite this article:
Prince Gallitzin State Park Facts for Kids. Kiddle Encyclopedia.