Kids Encyclopedia Facts
This page is about the lawyer, politician, diplomat from New York. For other uses, see Robert Livingston (disambiguation).

Robert Robert Livingston (November 27, 1746 (Old Style November 16) – February 26, 1813) was an American lawyer, politician, diplomat from New York, and a Founding Father of the United States. He was known as "The Chancellor", after the high New York state legal office he held for 25 years. He was a member of the Committee of Five that drafted the Declaration of Independence, along with Thomas Jefferson, Benjamin Franklin, John Adams, and Roger Sherman. Livingston administered the oath of office to George Washington when he assumed the Presidency in 1789. He was elected a member to the American Philosophical Society in 1801.

Livingston graduated from King's College in June 1765 and was admitted to the bar in 1770. King's College was renamed Columbia College of Columbia University following the American Revolution in 1784.

In October 1773, Livingston was appointed Recorder of New York City, but soon thereafter identified himself with the anti-colonial Whig Party, and was replaced a few months later by John Watts, Jr.

On July 30, 1777, Livingston became the first Chancellor of New York, which was then the highest judicial officer in the state. Concurrently, he served from 1781 to 1783 as the first United States Secretary of Foreign Affairs under the Articles of Confederation.

Livingston administered the presidential oath of office to George Washington at his first inauguration on April 30, 1789, at Federal Hall in New York City, which was then the nation's capital.

In 1789, Livingston joined the Jeffersonian Republicans (later known as the Democratic-Republicans), forming an uneasy alliance with his previous rival George Clinton and Aaron Burr, then a political newcomer. Livingston opposed the Jay Treaty and other initiatives of the Federalist party, founded and led by his former colleagues Alexander Hamilton and John Jay. He ran for Governor of New York as a Democratic-Republican, unsuccessfully challenging incumbent governor John Jay in the 1798 election.

After serving as chancellor for almost 24 years, Livingston left office on June 30, 1801. During that period, he became nationally known by his title alone as "The Chancellor", and even after leaving office, he was respectfully addressed as Chancellor Livingston for the remainder of his life. 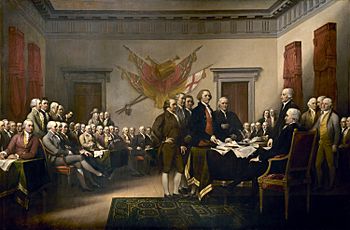 The Committee of Five stands at the center of John Trumbull's 1817 painting Declaration of Independence. Thomas Jefferson is depicted presenting the draft Declaration to the Congress with Benjamin Franklin at his side. Behind them are, from left to right, John Adams, Roger Sherman, and Livingston. 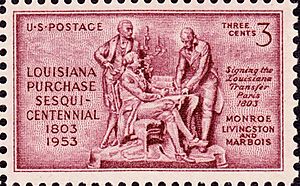 On June 11, 1776, Livingston was appointed to a committee of the Second Continental Congress, known as the Committee of Five, which was given the task of drafting the Declaration of Independence. After establishing a general outline for the document, the committee decided that Jefferson would write the first draft. The committee reviewed Jefferson's draft, making extensive changes, before presenting Jefferson's revised draft to Congress on June 28, 1776.

Before he could sign the final version of the Declaration, Livingston was recalled by his state. However, he sent his cousin, Philip Livingston, to sign the document in his place. Another cousin, William Livingston, would go on to sign the United States Constitution.

We have lived long but this is the noblest work of our whole lives ... The United States take rank this day among the first powers of the world.

During his time as U.S. minister to France, Livingston met Robert Fulton, with whom he developed the first viable steamboat, the North River Steamboat, whose home port was at the Livingston family home of Clermont Manor in the town of Clermont, New York. On her maiden voyage she left New York City with him as a passenger, stopped briefly at Clermont Manor, and continued on to Albany up the Hudson River, completing in just under 60 hours a journey which had previously taken nearly a week by sloop sailboat. In 1811, Fulton and Livingston became members of the Erie Canal Commission.

Livingston was a Freemason, and in 1784, he was appointed the first Grand Master of the Grand Lodge of New York, retaining this title until 1801. The Grand Lodge's library in Manhattan bears his name. The Bible Livingston used to administer the oath of office to President Washington is owned by St. John's Lodge No. 1, and is still used today when the Grand Master is sworn in, and, by request, when a President of the United States is sworn in.

On July 4, 1786, he was part of the second group elected as honorary members of the New York Society of the Cincinnati, along with Chief Justice Richard Morris, Judge James Duane, Continental Congressman William Duer, and Justice John Sloss Hobart. 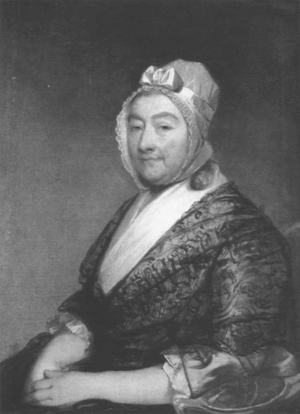 On September 9, 1770, Livingston married Mary Stevens (1751–1814), the daughter of Continental Congressman John Stevens and sister of inventor John Stevens III. Following their marriage, he built a home for himself and his wife south of Clermont, called Belvedere, which was burned to the ground along with Clermont in 1777 by the British Army under General John Burgoyne. In 1794, he built a new home called New Clermont, which was subsequently renamed Arryl House, a phonetic spelling of his initials "RRL", which was deemed "the most commodious home in America" and contained a library of four thousand volumes. Together, Robert and Mary were the parents of:

Livingston died on February 26, 1813, and was buried in the Clermont Livingston vault at St. Paul's Church in Tivoli, New York.

Through his eldest daughter Elizabeth he was the grandfather of four:

All content from Kiddle encyclopedia articles (including the article images and facts) can be freely used under Attribution-ShareAlike license, unless stated otherwise. Cite this article:
Robert R. Livingston (chancellor) Facts for Kids. Kiddle Encyclopedia.