Clermont is a town in Columbia County, New York, United States. The population was 1,965 at the 2010 census. The name of the town is French for "Clear Mountain", in reference to the mountain views in the town.

The town is in the southwestern corner of Columbia County, south of the city of Hudson.

"Clermont" was originally one of the oldest of the great estates of the mid-Hudson valley. The Clermont Manor was established in 1728, in what is now the town of Clermont. The manor was originally part of the 160,000-acre (650 km2) Livingston Manor; Clermont was a 13,000-acre (53 km2) section in the southwest corner that was bequeathed to Robert Livingston, a younger son. His descendants would come to own more than 500,000 acres (2,000 km2) in the Catskill Mountains and more than 100,000 acres (400 km2) in Dutchess County.

Clermont marked the northernmost penetration by British troops up the Hudson River during the American Revolution; Livingston's home was burned because of his prominent role in the Revolution. It was rebuilt between 1779 and 1782. The house is now a 500-acre (2.0 km2) New York State Historic Site and a National Historic Landmark.

In 1788, Clermont Manor was organized as the town of Clermont.

Clermont was the port of registry of Robert Fulton's first steamboat, co-owned by Livingston, which was called the North River. Today it is known as the Clermont. The ruins of its dock on the Hudson River can still be found at the historic site.

The estate, and later the town, was home to seven generations of the Livingston family until 1962.

The south town line is the border of Dutchess County, and part of the west town line, marked by the Hudson River, is the border of Ulster County. The northeast border of the town follows the Roeliff Jansen Kill, a tributary of the Hudson River. The border formed by the kill is for much of its length quite close to the town's southern border and then its border with the town of Germantown to the west, resulting in long, narrow extensions of the town to the southeast and north.

There were 593 households, out of which 36.9% had children under the age of 18 living with them, 57.3% were married couples living together, 11.8% had a female householder with no husband present, and 26.3% were non-families. 21.4% of all households were made up of individuals, and 9.1% had someone living alone who was 65 years of age or older. The average household size was 2.85 and the average family size was 3.33.

Communities and locations in Clermont 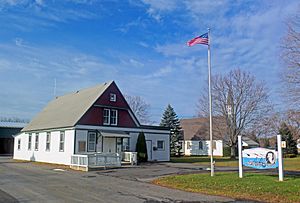 All content from Kiddle encyclopedia articles (including the article images and facts) can be freely used under Attribution-ShareAlike license, unless stated otherwise. Cite this article:
Clermont, New York Facts for Kids. Kiddle Encyclopedia.