Kids Encyclopedia Facts
Not to be confused with Fulton, Illinois.

Fulton County is a county in the U.S. state of Illinois. According to the 2010 census, it had a population of 37,069. Its county seat is Lewistown, and the largest city is Canton.

Bob Bucher is the Chairman of the Fulton County Board. Mike Hays was the County Administrator until the position was eliminated.

Fulton County was organized in 1823 from Pike County. It is named for Robert Fulton, inventor of the steamboat. It was the home of famous poet/writer Edgar Lee Masters in his early days; he wrote the famous Spoon River Anthology (1915). Fulton County was home to Camp Ellis during World War II.

The county is known for the annual Spoon River Scenic Drive which occurs the first 2 weekends in October. This has been a tradition since 1968 and attracts thousands of participants from all over the country.

Fulton County is the site of Dickson Mounds Museum, a state museum of Native American daily life in the Illinois River valley. 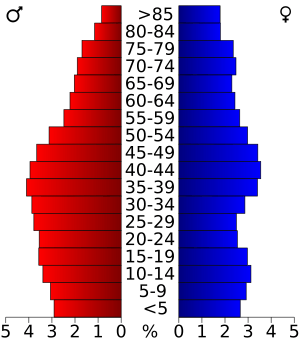 All content from Kiddle encyclopedia articles (including the article images and facts) can be freely used under Attribution-ShareAlike license, unless stated otherwise. Cite this article:
Fulton County, Illinois Facts for Kids. Kiddle Encyclopedia.