Knox County is a county in the U.S. state of Illinois. According to the 2010 census, it had a population of 52,919. Its county seat is Galesburg.

Knox County was named in honor of Henry Knox, the first US Secretary of War.

The first "Knox County" in what today is Illinois was unrelated to the modern incarnation. In 1790, the land of the Indiana Territory that was to become Illinois was divided into two counties: St. Clair and Knox. The latter included land in what was to become Indiana. When Knox County, Indiana, was formed from this portion of the county in 1809, the Illinois portions were subdivided into counties that were given other names.

The modern Knox County, Illinois, was organized in 1825, from Fulton County, itself a portion of the original St. Clair County.

Like its neighbor to the south, Fulton County, for its Spoon River Drive, Knox County is also known for a similar scenic drive fall festival the first two weekends in October, the Knox County Drive. 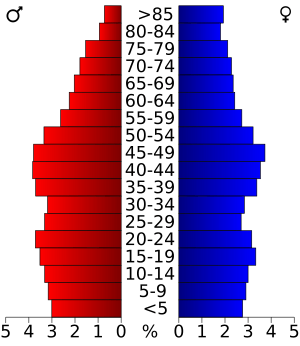 All content from Kiddle encyclopedia articles (including the article images and facts) can be freely used under Attribution-ShareAlike license, unless stated otherwise. Cite this article:
Knox County, Illinois Facts for Kids. Kiddle Encyclopedia.