Cadillac is a city in the U.S. state of Michigan and is the county seat of Wexford County. The population was 10,355 at the 2010 census. The city is situated at the junction of US 131, M-55 and M-115. The geographic center of Michigan is approximately five miles (8.05 km) north-northwest of Cadillac. 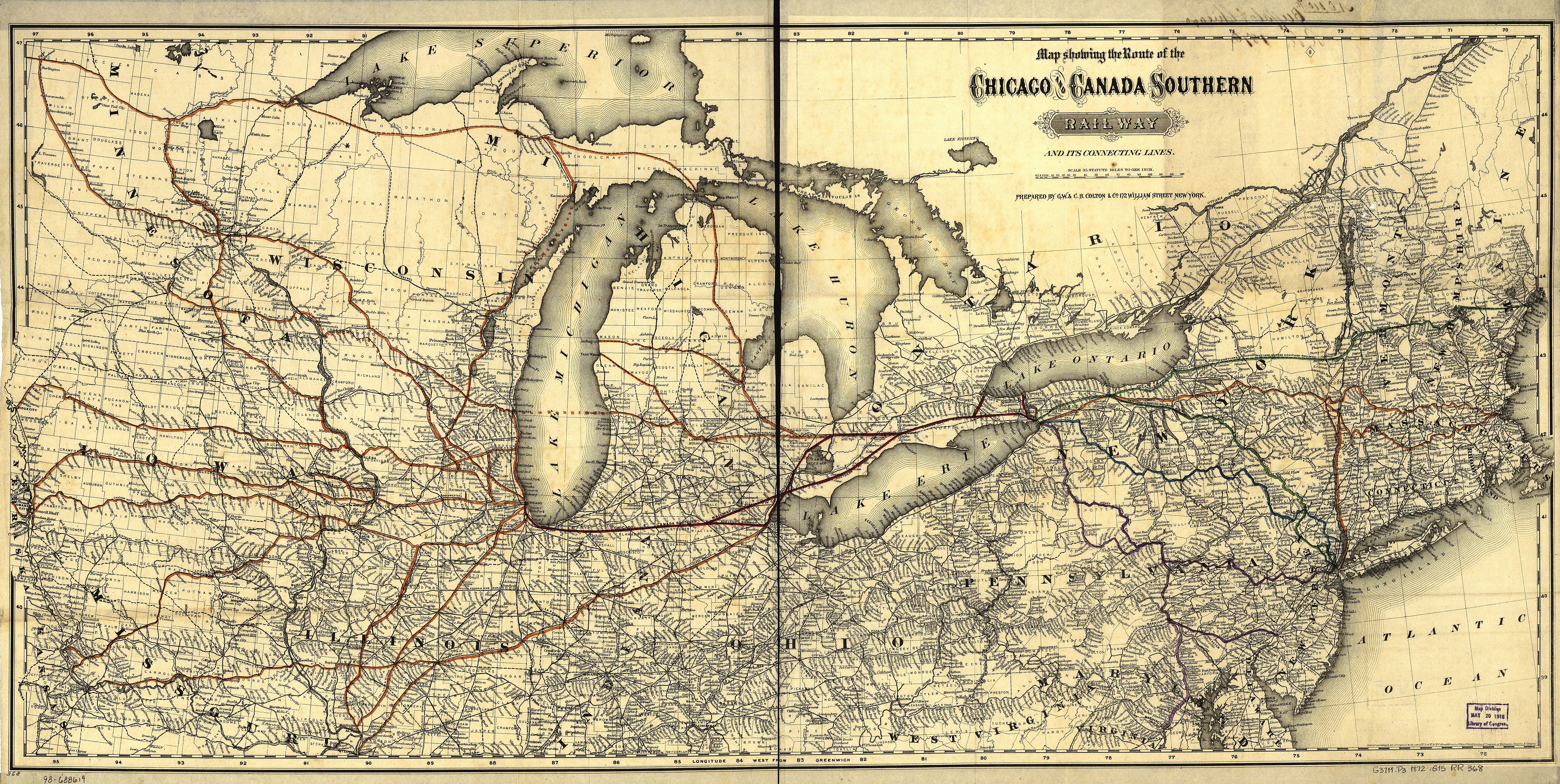 In this 1872 map, Clam Lake is shown as the sole stop in Wexford County and as the northern-most stop on the Grand Rapids and Indiana rail line.

Although European explorers and traders visited the area since the 18th century, permanent white communities were not established until some time later. Initial settlements were connected with the logging industry.

In 1871, Cadillac's first sawmill began operations. Originally called the Pioneer Mill, it was built by John R. Yale. That same year, George A. Mitchell, a prominent Cadillac banker and railroad entrepreneur, and Adam Gallinger, a local carpenter, formed the Clam Lake Canal Improvement and Construction Company. Two years later, the Clam Lake Canal was constructed between Big and Little Clam lakes, present-day Lakes Mitchell and Cadillac. Sawmill owners used the canal to transport timber from Big Clam Lake to the mills and railroad sites—the G.R. & I. Railroad had reached the area in 1872—on Little Clam Lake, in Cadillac.

The Wexford County seat of government, originally located in Sherman, was moved to Manton in 1881, as the result of a compromise between the feuding residents of Cadillac and Sherman. Cadillac partisans, however, won the county seat by county-wide vote in April 1882. The day following the election a sheriff's posse left the city for Manton by special train to seize the county records. After arriving and collecting a portion of the materials, however, an angry crowd confronted the Cadillac men and drove them from the town.

When the sheriff returned to Cadillac, a force consisting of several hundred armed men was assembled; this group reportedly included a brass band. The Sheriff's force, some of whom may have been intoxicated, traveled back to Manton to seize the remaining records. Although Manton residents confronted the Cadillac men and barricaded the courthouse, the posse successfully seized the documents and, in dubious glory, returned to Cadillac. 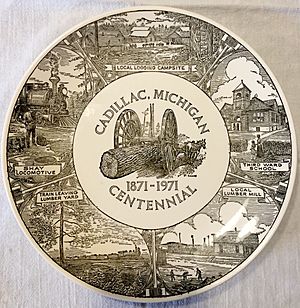 In 1878, Ephraim Shay perfected his Shay locomotive, which was particularly effective in its ability to climb steep grades, maneuver sharp turns and manage imperfections in railroad tracks. Cadillac was home to the Michigan Iron Works Company, which manufactured the Shay locomotive for a short time in the early 1880s. It was however the lumber industry that continued to dominate the city, drawing in a large immigrant labor force, most of whom were Swedish (two of Cadillac's sister cities are Mölnlycke, Sweden, and Rovaniemi, Finland).

The City Park, featuring the Kris Eggle Memorial Fountain and the Rotary Pavilion

In 1936, the U.S. Forest Service and the Civilian Conservation Corps created the Caberfae Ski Area, which led to promotion of the area as a tourist center. Caberfae remains in operation today, as the oldest ski resort in the midwest. Tourism has since become an important sector of Cadillac's economy. In the summer, tourists travel to the city for boating, fishing, hiking, mountain biking and camping. During the fall, hunting and color tours are popular. The winter is possibly the busiest season; the area can be found packed with downhill skiers, cross-country skiers, ice-fishers, snow-shoers and–most of all-snowmobilers. The North American Snowmobile Festival (NASF) is held on frozen Lake Cadillac every winter.

In October 1975 the rock group Kiss visited Cadillac and performed at the Cadillac High School gymnasium. They played the concert to honor the Cadillac High School football team. In previous years, the team had compiled a record of sixteen consecutive victories, but the 1974 squad opened the season with two losses. The assistant coach, Jim Neff, an English teacher and rock'n'roll fan, thought to inspire the team by playing Kiss music in the locker room. He also connected the team's game plan, K-I-S-S or "Keep It Simple Stupid", with the band. The team went on to win seven straight games and their conference co-championship. After learning of their association with the team's success, the band decided to visit the school and play for the homecoming game. 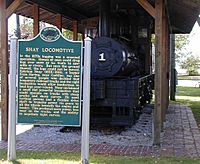 Cadillac maintains a number of state historic landmarks. Most are marked with a green "Michigan Historical Marker" sign that includes a description of the landmark. There are six markers within the city limits: 'Cadillac Carnegie Library,' 'Charles T. Mitchell House,' 'Clam Lake Canal,' 'Cobbs & Mitchell Building,' 'Cobbs & Mitchell No. 1' and the 'Shay Locomotive,' which is pictured at the right. Two more are in the near Cadillac area ('Caberfae Ski Resort' and 'Greenwood Disciples of Christ Church') and another two are dispersed in surrounding Wexford County ('Battle of Manton' and '1st Wexford County Court House').

The 1,150-acre (5 km2) Lake Cadillac is entirely within the city limits. The larger, 2,580-acre (10 km2) Lake Mitchell is nearby on the west side of the city, with 1,760 feet (540 m) of shoreline within the city's municipal boundary. The lakes were connected by a stream which was replaced in 1873 by the Clam Lake Canal. The canal was featured on Ripley's Believe It or Not in the 1970s due to the phenomenon that in winter the canal freezes before the lakes and then after the lakes freeze, the canal thaws and remains unfrozen for the rest of the winter.

Cadillac sits on the eastern edge of the Manistee National Forest and the surrounding area is heavily wooded with mixed hardwood and conifer forests. A main agricultural industry in the area is Christmas tree farming. Cadillac was chosen in 1988 to donate the holiday tree to sit on the lawn of the U.S. Capitol building in Washington D.C.

The area surrounding Cadillac is primarily rural, and is considered to be part of Northern Michigan. The small size of nearby communities make the city a major commercial and industrial hub of the region.

The commercial center of the city is located on the eastern edge of Lake Cadillac. Most downtown buildings range from two to five stories in height and face the traditional corridor of travel through town, Mitchell Street, the city's tree-lined main street. The downtown contains a movie theater, gift shops, restaurants, a bookstore, specialty food stores, jewelers, clothing retailers and various other businesses. The Courthouse Hill Historic District, established in April 2005, lies adjacent to the city's commercial center. The District contains a number of large Victorian-style residences built by the lumber barons and businessmen who helped establish the city in the 1870s. Population and building density is highest in this area.

On the western portion of Lake Cadillac, where M-55 intersects M-115, is what is locally referred to as Cadillac West. This is a small commercial district, bordering Mitchell State Park and the two lakes, which caters mostly to tourists. It contains a number of motels and restaurants.

Along the northern and southern stretches of the lake are the residential areas of the city. They are generally of low to moderate density, characterized primarily by single family structures.

Cadillac experiences a typical northern Michigan climate, undergoing temperate seasonal changes, influenced by the presence of Lake Michigan and the inevitable lake effect. Winters are generally cold with large amounts of snowfall. Summers are warm. The average high temperature in July is 80 °F (27 °C) and the average low is in February, at 9 °F (−13 °C). Summer temperatures can exceed 90 °F (32 °C), and winter temperatures can drop below 0 °F (−18 °C). Average annual rainfall is 30 inches (76 cm), and average annual snowfall is 81 inches (206 cm) . Snowfall typically occurs between the months of November and March. According to the Köppen Climate Classification system, Cadillac has a humid continental climate, abbreviated "Dfb" on climate maps.

There were 4,280 households of which 32.9% had children under the age of 18 living with them, 39.2% were married couples living together, 16.4% had a female householder with no husband present, 5.7% had a male householder with no wife present, and 38.7% were non-families. 32.0% of all households were made up of individuals and 14% had someone living alone who was 65 years of age or older. The average household size was 2.34 and the average family size was 2.90.

There were 4,118 households out of which 32.2% had children under the age of 18 living with them, 43.9% were married couples living together, 14.2% had a female householder with no husband present, and 37.4% were non-families. 31.8% of all households were made up of individuals and 14.4% had someone living alone who was 65 years of age or older. The average household size was 2.37 and the average family size was 2.96.

Cadillac is situated as the confluence of three highways: US 131, M-55 and M-115. Prior to 2001, the northern end of the freeway portion of US 131 was located at the southern entrance to Cadillac. With the construction of a bypass, the US 131 freeway was extended around the east side of the city. The former route of the highway through downtown Cadillac was redesignated as BUS US 131. In the city, BUS US 131 is named Mitchell Street, after George Mitchell, but may be referred to as main street.

The city is serviced by rail via the Great Lakes Central Railroad. This is primarily a freight line, although passenger service is expected in the future.

The White Pine Trail's northern terminus is in Cadillac. The trail, which stretches 92 miles (148 km) and originates from Comstock Park, follows an abandoned railroad bed into the center of the city. The trail is paved from the village of Leroy 16 miles north to Cadillac.

All content from Kiddle encyclopedia articles (including the article images and facts) can be freely used under Attribution-ShareAlike license, unless stated otherwise. Cite this article:
Cadillac, Michigan Facts for Kids. Kiddle Encyclopedia.