Muskegon River is a river in the western portion of the lower peninsula of the U.S. state of Michigan. The river source is located at Houghton Lake in Roscommon County, flowing out of the North Bay into neighboring Missaukee County. The river passes through Clare County, Osceola County, Mecosta County, Newaygo County, and Muskegon County, and generally flows southwesterly to its mouth at Muskegon, Michigan, where it empties into Muskegon Lake. Muskegon Lake is connected to Lake Michigan via a mile-long channel. The river has several major branches, such as the Hersey River, Cedar Creek and Little Muskegon River. The primary river channel is 216 miles (348 km) long and drains an area of 2,350 square miles (6,100 km2). In September 2002 an often cited article, National Geographic raised concerns about a controversial deal made with Nestle Waters North America giving them permission "to bottle up to 210 million gallons (about 800 million liters) a year from an aquifer north of Grand Rapids, Michigan that recharges the Muskegon River".

Like many of its neighboring streams, the Muskegon was one of the favored logging rivers during the boom years of the 1880s-1890s, and a keen eye can still pick out remnants of stray logs left over from the spring logging runs which are embedded on the river bottom.

Winfield Scott Gerrish is credited with revolutionizing lumbering in Michigan by building a seven-mile-long logging railroad from Lake George to the Muskegon River. However, there were several Michigan logging railroads in operation in the 1850s including the seven-mile-long Blendon Lumber Company railroad in Ottawa County which was the first in the state to employ a steam locomotive in May 1857.

The Muskegon River originates at the north bay of Houghton Lake, and flows in a northwesterly direction under US Route 127, meandering through marshlands located northwest of the main body of Houghton Lake. The river continues south where it forms the Dead Stream Flooding State Wildlife Management Area, and continues south towards Michigan Route (M-55) near the Ben D. Jeffs River Park. The river continues meandering southwesterly towards

At Evart, the river passes under US Route 10, and proceeds westerly near downtown Evart, skirting past the Evart Airport. The river overbank areas downstream of Evart become more densely populated with riverfront homes at this point, as the river continues to widen. near Hersey, Michigan. Residential development along the river becomes commonplace as the river curves south and west, taking a southerly course through Mecosta County.

After crossing under Michigan Route 20, the river begins to expand into the reservoir formed by Hardy Dam, with Croton Dam located downstream in Newaygo County. These two dams are hydroelectric dams owned and operated by Consumers Energy. At this point, the river becomes popular recreational area, known for river tubing, kayaking, and canoeing.

Once in Muskegon County, the river channel flattens out and widens, comprising the Muskegon State Game Area northeast of Muskegon, Michigan. Within this area, deer, geese, duck, and native waterfowl are present. The marshland upstream of the US Route 31 causeway is a popular fishing area for anglers.

After passing under the Michigan Route 120 bridges, the river empties into Muskegon Lake, which is a natural inlet area to Lake Michigan.

There is abundant wildlife, including otters, waterfowl, white-tailed deer, and eagles and, although development has been creeping in, the upper reaches are still fairly remote and natural with much of the surrounding land composed of state-owned tracts.

Camping is another popular activity around the river with there being several shoreline parks, and campgrounds. There are also various inns and cabins down the river that can provide a night, week's or a month's accommodations. Hunting is popular in the forests near by on public hunting land. 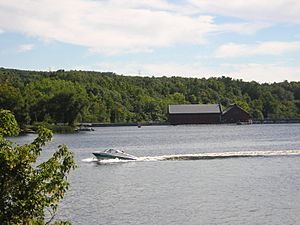 The three major dams of the Muskegon River (Rogers, Hardy and Croton) generate about 45,600 kilowatts, with about 30,000 of that from Hardy Dam. That is enough electricity to serve a community of nearly 23,000. The smaller Reedsburg Dam is near the source of the Muskegon River.

Cities and towns along the river

All content from Kiddle encyclopedia articles (including the article images and facts) can be freely used under Attribution-ShareAlike license, unless stated otherwise. Cite this article:
Muskegon River Facts for Kids. Kiddle Encyclopedia.