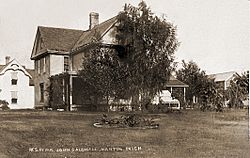 Manton is a city in Wexford County in the U.S. state of Michigan. The population was 1,287 at the 2010 census.

The townsite was purchased and cleared in 1872 along the proposed route of the Grand Rapids and Indiana Railroad, by two local settlers, Ezra Harger and George Manton, and a third partner, William Mears. The place was known locally as Cedar Creek, but the railroad named the new station "Manton" after its first postmaster, George Manton.

There were 504 households, of which 37.3% had children under the age of 18 living with them, 37.1% were married couples living together, 20.8% had a female householder with no husband present, 6.9% had a male householder with no wife present, and 35.1% were non-families. 31.0% of all households were made up of individuals, and 15.9% had someone living alone who was 65 years of age or older. The average household size was 2.54 and the average family size was 3.10.

All content from Kiddle encyclopedia articles (including the article images and facts) can be freely used under Attribution-ShareAlike license, unless stated otherwise. Cite this article:
Manton, Michigan Facts for Kids. Kiddle Encyclopedia.