Frankfort is a city in Benzie County in the U.S. state of Michigan. The population was 1,286 at the 2010 census. The elevation of Frankfort is 600 ft (180 m) above sea level. The city is situated with Lake Michigan to the west, Lake Betsie, formed by the Betsie River before flowing into Lake Michigan, on the south and Crystal Lake Township to the north and east. The city is on M-22 just north of Elberta. M-115 has its western terminus in the city. The Frankfort North Breakwater Lighthouse is at the end of the northern breakwater in Lake Michigan. 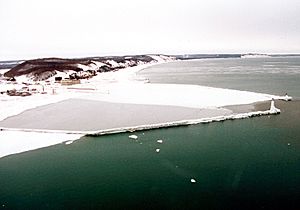 The harbor entrance to Frankfort is completely frozen over in February 1994.

There were 601 households of which 18.0% had children under the age of 18 living with them, 41.8% were married couples living together, 10.0% had a female householder with no husband present, 2.8% had a male householder with no wife present, and 45.4% were non-families. 41.3% of all households were made up of individuals and 23.3% had someone living alone who was 65 years of age or older. The average household size was 1.98 and the average family size was 2.63.

Father Jacques Marquette, one of the first Jesuit missionaries to the Great Lakes Indians, may have died and been buried in Frankfort in May 1675. Very limited and inexact records make the death site a matter of considerable debate among historians. Frankfort is one of two locations attributed as the death site by the natives since the earliest settlers arrived in northern Michigan and one of at least two sites claimed by historians. In any case within two years the remains were taken to the church at St. Ignace and given a traditional Indian burial.

The land which was to become the City of Frankfort was recognized at an early date for its economic and commercial potential because it was nearly all purchased by the contractors who surveyed the land for the United States - - the Risdon family. The first known settler in Frankfort was Joseph Oliver who purchased the 14 acres (57,000 m2) between Lake Aux Becs Scies and Lake Michigan in 1852 and built a small cabin. Oliver was a woodsman who lived off the land: fishing, hunting, trapping and cutting timber. In 1855 a schooner owned by George W. Tifft of Cleveland was caught in a gale on Lake Michigan and driven before the wind. Imagine the surprise of Captain Snow when he found a previously little known river outlet and harbor which provided a safe refuge. Thus, Aux Becs Scies Lake was discovered by an outside investor, George W. Tifft, who purchased most of the land around and adjoining the lake (more than a thousand acres (4 km²) all together). In 1859 a company from Detroit owned by Ransom Gardiner, George S. Frost, and others purchased the Tifft lands and commenced development of Frankfort within the year. In September, Louis A. Doby moved to the area as agent of the developers with John H. Adams to oversee the work. They sent along a sawmill and A.S. Dow to manage that phase of the development. Descendants of the Dow family—founders of the Dow Chemical Company—are unaware of any relationship to A.S. Dow. Doby held a contract to dredge a new channel so the harbor would be available for navigation by all types of craft. He also constructed a building for the firm which served as a hotel and store. The first lot in the development near the west end of Forest Avenue was sold to William H. Cogshall. He built a large home for his family but his dwelling also served the fledgling community as a hotel and for religious and political meetings. The second lot, also at the west end of Forest Avenue, was purchased by Dr. Alonzo J. Slyfield, who served for 22 years as keeper of the Point Betsie Light House. Although the development had a promising start there was relatively little activity during the Civil War years. Virtually all of this early development took place in the area of First, Second, Third, Fourth, and Main Streets and Forest Avenue.

By 1867 the United States government recognized the importance of Aux Becs Scies harbor and commenced improvements. Doby’s work from 1859 had completely disappeared and a channel was dredged at the south end of the strip of land dividing the two lakes. Shortly an enthusiastic newspaperman reported four to ten vessel arrivals a day and new settlers in droves. Stores were built and a large hotel, the Delbridge House, opened for business. A post office had been established in 1860 with Cogshall as postmaster but was eventually closed for want of business. This was reopened in 1867 with N.W. Nelson postmaster. Among the other early settlers were Jacob and Charles Voorhies, J.B. Delbridge, Dr. T. Harvey, and J.B. Collins who opened his drug store in 1869.

Although the initial opening of the harbor was in 1867 the work was actually ongoing for several years. By 1870 the channel was 200 feet (61 m) wide and had a south pier of 600 feet (180 m) while the north one measured 550 feet (170 m). A depth of about nine feet was maintained which allowed most of the vessels on the Great Lakes to enter the harbor. In 1873, the United States Lighthouse Service established the first pier head light to mark the entrance. In 1887 a United States Life Saving Station was established on the south side of the harbor. In 1934, as the United States Coast Guard, this station was moved to large new quarters on the Frankfort side of the channel. The original piers had been extended until they reached a length of 2,000 feet (610 m) in 1912. Between 1929 and 1932 the breakwaters were built to protect the harbor at a cost of over a million dollars and the old piers were reduced in length. 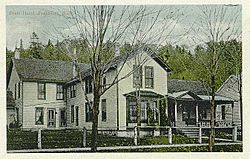 Crystal Lake Township was organized in 1859 and initially included all of the present Benzie County. The first Township meeting was held in the spring of 1860 at Frankfort in Doby’s (the development company) store. The Benzie County government was organized by Public Act 385 of 1869 and local citizens set off in search of a county seat and a courthouse. After two elections, Frankfort was chosen and the Supervisors met in the community for the first time in April 1870. Although the first session was held in the Saterlee Hotel later sessions were held in a two story commercial building on the corner of Second and Main Streets. However, in 1872 new elections were held and citizens of the county decided to move the county seat into the country side east of Benzonia. Frankfort contested the move and managed to retain the seat of government, at least in name, until 1876. Following another election in 1894, the county seat returned to the community and a large school building was converted to a courthouse. Although the matter was frequently debated the county seat remained in Frankfort until 1908 when citizens voted to move it to an abandoned church in the Village of Honor.

In October 1873, the citizens of Frankfort unanimously petitioned the circuit court to become a village under a new act of the State Legislature. The petition was granted but the effort failed when the State Act was declared unconstitutional. In 1885 the citizens petitioned the State Legislature in the normal fashion and the incorporated village of Frankfort was established by Local Act No. 352 of 1885 on April 1 and by Local Act No. 352 of 1885 on May 14. (Legal boundaries of Frankfort are: Government Lots 2, 3, and 4 of Section 21; the Southeast Quarter of the Northeast Quarter of Section 21; the South Half of the North Half of Section 22; Government Lots 1, 2, 3, and 4 of Section 27; and the Northwest Fractional Quarter of Section 28 of Township No. 26 North of Range No. 16 West.)

Frankfort has enjoyed a steady growth over the years and by the 1930s had reached a population whereby they could become a city. Accordingly, voters of the village elected to become a city of the fifth class on March 11, 1935, with 229 votes in favor and 127 against. There was no change in the boundaries of the original village.

All content from Kiddle encyclopedia articles (including the article images and facts) can be freely used under Attribution-ShareAlike license, unless stated otherwise. Cite this article:
Frankfort, Michigan Facts for Kids. Kiddle Encyclopedia.