Kids Encyclopedia Facts
Not to be confused with Montgomery County, New York.

Montgomery is a village located in Orange County, New York, United States, 60 (97 km) miles northwest of New York City, and 90 miles (140 km) southwest of Albany. The population was 3,814 at the 2010 census. It is part of the Poughkeepsie–Newburgh–Middletown, NY Metropolitan Statistical Area as well as the larger New York–Newark–Bridgeport, NY-NJ-CT-PA Combined Statistical Area. The village is named after General Richard Montgomery, an officer of the American Revolution.

The original name for the village was Ward's Bridge, from James Ward, one of the first settlers, who built and operated a grist mill in what is now the village during the mid-18th century. A bridge over the Wallkill River near the mill was named after him, and even today the name and the bridge, which carries Route NY-17K into the village, remain in use.

Most of that water area is accounted for by the portions of the Wallkill which forms Montgomery's northern boundary; there are no other significant bodies of water in the village. The village is completely surrounded by the Town of Montgomery.

From the river the village extends to the southwest almost two miles (3.2 km), generally longer than it is wide, with a projecting area to the southeast along Goodwill Road. The village's downtown is centered on its historical core, the area covered by the Bridge Street and Union Street-Academy Hill historic districts, just south of Ward Street (NY-17K). Clinton Street, one block south of Ward, is lined with shops and restaurants. Further to the east, some larger businesses are located near the former Wallkill Valley Railroad (WVRR) tracks, still used by Norfolk Southern as a freight spur.

Away from downtown, the streets become primarily residential, with newer housing. There are some undeveloped areas at the northern and southern extremes of the village, the latter taking the form of actively farmed fields. To the west-southwest of downtown, closer to the river, is Montgomery's major park, Veteran's Memorial Park.

These lands in the west are the lowest-lying in the village. Much of its topography rises gently from the river, with little relief save the Academy Hill area on the east edge of downtown where the village hall is located, and a 455-foot (139 m) hill at the junction of Purple Martin Road and Cardinal Drive that is the highest point in the village, marked by a water tower.

Route 17K leads east to Newburgh and west to Bloomingburg, where it ends at NY 17, the future I-86. Its major intersection in the village, Montgomery's only traffic light, is the three-way intersection with Union Street, the northern terminus of NY-211, which connects it to Middletown to the southwest. Just south of the village, NY-416 branches off from 211, providing access to Goshen via NY-207 at its southern terminus.

Ward's Bridge, the entrance to Montgomery from the west

Interstate 84 passes close to the southeast. The nearest access to the village is Exit 5, reached by taking Route 17K or Goodwill Road east to NY 208. From here it is a 6-mile drive to the New York State Thruway (Interstate 87), the nearest major north-south road. New York City is another 58 miles south from Newburgh on the Thruway.

The nearest passenger rail connection is the Campbell Hall station on Metro-North's Port Jervis Line, located on Watkins Road near State Route 207, approximately 7 miles southwest of Montgomery. It provides commuter rail service to the Hoboken Terminal in New Jersey. Many commuters also use Metro-North's Beacon station, 17 miles east of Montgomery, to travel to Midtown Manhattan. Some officials in Walden, where the freight spur ends, have been lobbying Metro-North to restore passenger service along the old WVRR freight spur, which also raises the possibility of a station in Montgomery.

Orange County Airport, KMGJ, is located just south of the village. Commercial passenger service is available at Stewart International Airport outside Newburgh, a short distance east via I-84. 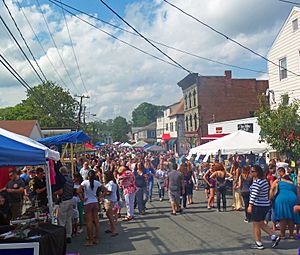 Since 1989 the village has held its annual General Montgomery Day event on the Saturday following Labor Day. The festivities begin with a parade along Union Street to village hall on Clinton Street; there is also an 8 km (5.0 mi) run. Streets are closed off downtown and vendors and various local organizations set up tents. Visitors come from all around the Hudson Valley; there have been as many as 30,000 some years. The village used to suspend its open-container law for the day until some incidents arising from the heavy drinking made them reconsider. It concludes with fireworks in the evening at the Pleasure Ground park.

All content from Kiddle encyclopedia articles (including the article images and facts) can be freely used under Attribution-ShareAlike license, unless stated otherwise. Cite this article:
Montgomery (village), New York Facts for Kids. Kiddle Encyclopedia.