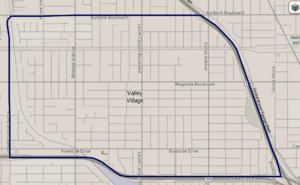 Valley Village, as mapped by the Los Angeles Times

Valley Village is a neighborhood in the city of Los Angeles, located within the San Fernando Valley.

According to Elke Garman, co-president of the Valley Village Homeowners Association in 1991, the history of Valley Village went back to the 1930s, when workers at nearby motion picture studies built houses there. The local post office on Magnolia Boulevard canceled all mail with a "Valley Village" postmark. It was, however, officially a section of North Hollywood. 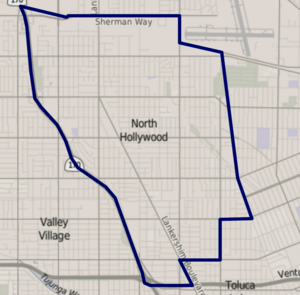 The idea of separating Valley Village from North Hollywood was brought into public light with a meeting of about 300 homeowners at Colfax Avenue Elementary School in December 1985, yet it wasn't until 1991 that Valley Village got seven new blue reflective markers from the city of Los Angeles to mark its borders.

Reporter James Quinn of the Los Angeles Times wrote that Valley Village no longer wanted to be associated with North Hollywood, "a community that has grown old, heavily Latino and crime-plagued," but, in the same article, Valley Village leader Tom Paterson was quoted as saying that the move "was more than an attempt to boost property values" and that it "had nothing to do with ethnic demographics." Rather, he said, "It was one economic level seeking to have its own identity." Quinn wrote that:

Houses along Valley Village's lushly landscaped, graffiti-free streets cost up to $800,000, and a two-bedroom, two-bath entry-level house will run $300,000, residents say. Elsewhere in North Hollywood, that same size entry-level house can be purchased for as little as $150,000, real estate agents say. And the cheaper house is likely to have an overgrown, dusty yard and to be in a neighborhood reeling from crime, with gang graffiti splattered on block walls and street signs.

In December 1985, some three hundred homeowners gathered at Colfax Avenue Elementary School to begin a campaign to head off development of what they called "stucco mountains" – continued construction of large apartments and office buildings in the area. Councilman Joel Wachs said he would support the drive, although he rejected the details of a proposed advisory panel for the area. He said a proposed panel of homeowners might overlook the concerns of renters and the need for rental housing. Residents complained about blocked views, parking problems and traffic congestion because of buildings as high as five stories next to their single-family homes.

The measure would not have banned construction but would have limited all new buildings to two stories and the square footage of commercial development to 1 1/2 times the size of the lot. The plan had the support of Valley Village resident Tom Paterson, president of the Valley Village Homeowners Association, but the opposition of, for one, Marvin Eisenman, an apartment-building owner who said it would not be fair to landowners who purchased property with the idea of developing it. It was touted as a temporary measure until city planners could conduct public hearings on new, permanent development limits. On September 17, 1986, the City Council approved the idea on a 10-2 vote, but less than a month later it reversed itself after heavy lobbying – by former Councilman Arthur K. Snyder, among others – and sent the ordinance back to committee, with the idea that it could be brought back with exemptions for areas where development had already occurred. Finally, substantially the same measure was approved by the council on a temporary basis with exemptions for two dozen properties in areas where there had already been substantial development, like the south side of Riverside Drive between Colfax Avenue and Laurel Canyon Boulevard.

Eventually, the Los Angeles city Planning Commission recommended that a three-story limit be adopted for the Valley Village area.

The 2.09-square-mile Valley Village lies north of Studio City, east of Sherman Oaks, and south and west of North Hollywood.

Mapping L.A. describes the Valley Village borders as Burbank Boulevard to the north, the Central Branch of the Tujunga Wash to the east, the Ventura Freeway to the south and Coldwater Canyon Avenue to the west.

A total of 24,190 people lived in Valley Village's 2.09 square miles, according to the 2000 U.S. census – averaging 11,600 people per square mile, about average for Los Angeles. Population was estimated at 25,665 in 2008. With its percentage of white people considered high for Los Angeles County, Valley Village is still moderately diverse in its ethnic makeup, with a diversity index of 0.512. "The diversity index measures the probability that any two residents, chosen at random, would be of different ethnicities. If all residents are of the same ethnic group it's zero. If half are from one group and half from another it's .50." Whites made up 66.7% of the population, Latinos were 18.9%%, with black people at 5.5% and Asians and others, both at 4.4%.The median age was 36, considered old when compared to the city as a whole. There is a sizable Jewish community.

The $55,470 median household income in 2008 dollars was average for the city and county. The average household size of two people was low for both the city and the county. The percentages of divorced men, divorced women, never-married men and widowed women were among the county's highest. 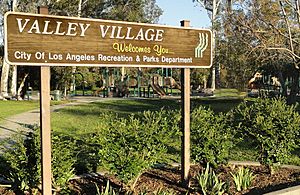 Valley Village Park, an unstaffed pocket park, as well as the North Hollywood Recreation Center, serve the area of Valley Village. The recreation center has an auditorium, lighted indoor baseball diamond courts, lighted outdoor baseball diamonds, lighted outdoor basketball courts, a children's play area, lighted handball courts, picnic tables, an outdoor unheated seasonal pool, and lighted tennis courts. In addition the center has an indoor gymnasium which can be used as a second auditorium and a community room; the gymnasium's capacity is 250 people. 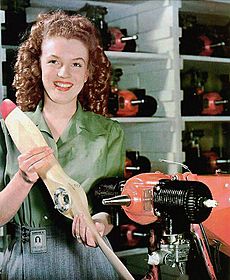 A house at 5258 Hermitage Avenue where film actress Marilyn Monroe lived in 1944-45 under her married name of Norma Jean Dougherty, was demolished by a property developer to make way for a condominium project in June 2015 even as it was under consideration as a historic landmark. She lived there at age 17 while her husband, James Dougherty, was in the Navy, and she had a job inspecting parachutes at a nearby factory. She was living there when she was asked to pose for her first pin-up photo. It was said, however, that the chances of the house being declared a landmark were slim because, as Ken Bernstein, director of the city's Office of Historic Resources, put it, "There are hundreds, if not thousands, of houses associated with celebrities. Monroe resided at the property for only one year "and did not live in the unit during the productive period of her career," a report by city planning officials said.

In October 2015 Los Angeles was facing a lawsuit over the house's destruction by a group called Save Valley Village. At issue was the City Council's practice of "automatically heeding the wishes" of the council member who represents any given area in a controversy. The group said it also had "overwhelming evidence" that an environmental report should have been prepared for the condo project. As well, the group asked that the city nullify any development projects that received unanimous support during the previous twelve months.

All content from Kiddle encyclopedia articles (including the article images and facts) can be freely used under Attribution-ShareAlike license, unless stated otherwise. Cite this article:
Valley Village, Los Angeles Facts for Kids. Kiddle Encyclopedia.