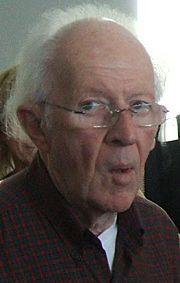 Ralph Angus McQuarrie (June 13, 1929 – March 3, 2012) was an American costume designer and illustrator who designed the original Star Wars trilogy, the original Battlestar Galactica TV series, E.T. the Extra-Terrestrial and Cocoon, for which he won an Academy Award.

McQuarrie was born on June 13, 1929 in Gary, Indiana, a suburb close to Chicago, Illinois. He was raised in Billings, Montana. He was educated at the Art Center School. McQuarrie was married to Joan Benjamin from 1983 until his death in 2012. McQuarrie died on March 3, 2012 in Berkeley, California from Parkinson's disease, he was 82 years old.

All content from Kiddle encyclopedia articles (including the article images and facts) can be freely used under Attribution-ShareAlike license, unless stated otherwise. Cite this article:
Ralph McQuarrie Facts for Kids. Kiddle Encyclopedia.