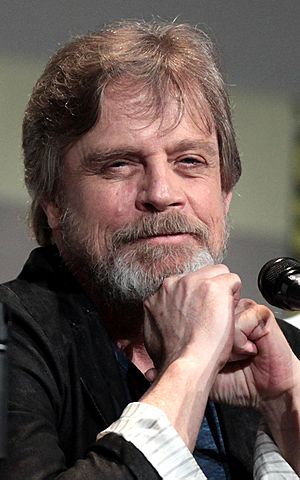 Mark Hamill reprised the role of Luke in Star Wars: The Force Awakens in 2015.t

Luke Skywalker is a character from the Star Wars universe. He is the main hero of the Star Wars movies and book series. Luke was in three Star Wars movies, Episode IV: A New Hope, Episode V: The Empire Strikes Back and Episode VI: Return of the Jedi. He was also in most of the books that took place after these movies. Luke Skywalker was played by actor Mark Hamill in all three movies. The character was also shown briefly at his birth in Episode III: Revenge of the Sith.

Luke Skywalker is the main character during the original three movies. These movies follow his life from being a farmer on the planet Tatooine to becoming an important part of the Rebel Alliance and a Jedi Knight.

The adult Luke Skywalker is first seen in this movie. He was raised on the planet Tatooine. Tatooine is a desert planet. He lives with his uncle, Owen and his aunt, Beru. After he bought two droids, named C-3PO and R2-D2, stormtroopers sent by the Empire start to look for them. R2-D2 runs away one night. In the next morning, Luke and C-3PO look for him. Luke is attacked by Tusken Raiders, but is rescued by Obi-Wan Kenobi. R2-D2 plays a message from Princess Leia asking for help from Obi-Wan. Obi-Wan then says that Luke must come with him to Alderaan to learn about the Force. Luke learns that his father, Anakin Skywalker, was a Jedi. Luke also gets his father's old lightsaber. Luke says that he can not go with him and returns home. When he does, he sees that his home was destroyed (broken down). He goes back to Obi-Wan and agrees to go with him and learn about the Force. Luke, Obi-Wan and the droids go to Mos Eisley to find a pilot to take them to Alderaan. They get Han Solo and Chewbacca to take them to Alderaan. When they get there, they see that the planet is gone and there is a small moon close to where it was. This small moon is the Death Star. On board the Death Star, Luke, Han, and Chewbacca save Princess Leia. As they are about to leave they see Obi-Wan fighting Darth Vader. Obi-Wan gives his life so that the group can escape. Luke and the others go to Yavin 4 so that the secret plans to the Death Star in R2-D2 can be used to destroy the Death Star. Luke then pilots an X-wing to fight against the big space station. Luke uses the Force and fires the missile that destroys the Death Star.

The Empire Strikes Back

Luke Skywalker has joined the Rebel Alliance and is on the ice planet of Hoth. While outside the base, Luke is attacked by a wampa. After escaping the wampa, Luke is weak and hurt. He sees the image of Obi-Wan Kenobi. He tells him to go to the planet Dagobah to be taught by the Jedi master Yoda. Luke is saved by Han Solo. Shortly after, the Empire attacks the Rebel base on Hoth. The Rebels leave the base. Luke takes R2-D2 in his X-wing and the two travel to Dagobah. They make a crash landing on the swamp planet and go looking for Yoda. Luke soon finds Yoda, but Yoda does not think Luke should be a Jedi. Luke convinces Yoda, and the old master starts to teach Luke. Luke faces difficult things to do. Before he completes his training he has a vision of the future. In it his friends were being tortured. Although Yoda, and the Force Ghost of Obi-Wan warn him not to leave, Luke goes to Cloud City. When he gets there he sees that it was a trap set by Darth Vader. The two then get into a lightsaber battle. Vader cuts off Luke's hand and then tells Luke that he is actually his father, Anakin Skywalker. Vader gives Luke the choice to join him but Luke says no and jumps off the platform. He is rescued by Leia and taken to a medical spaceship, where his hand is replaced.

Return of the Jedi

In Return of the Jedi, Luke fights Darth Vader.

All content from Kiddle encyclopedia articles (including the article images and facts) can be freely used under Attribution-ShareAlike license, unless stated otherwise. Cite this article:
Luke Skywalker Facts for Kids. Kiddle Encyclopedia.