The Broadhurst Theatre is a Broadway theatre located at 235 West 44th Street in Midtown Manhattan.

It was designed by architect Herbert J. Krapp, a well-known theatre designer who had been working directly with the Shubert brothers; the Broadhurst opened September 27, 1917. Built back-to-back with the Majestic, it was meant to resemble the style of the neighboring Shubert and Booth theaters designed by Henry B. Herts, using less expensive brick and terra cotta materials on the discreetly neoclassical façades

It was named after George Howells Broadhurst, an Anglo-American dramatist who came to America in 1886. In addition to writing plays, he managed theaters in Milwaukee, Baltimore, and San Francisco before he decided to open his own in association with the Shubert brothers. The theatre was constructed to house both musicals and plays, which it has done successfully for more than a century. It has been designated a New York City landmark.

The Broadhurst opened on September 27, 1917 with George Bernard Shaw's Misalliance, the first New York production of the philosophical 1910 comedy. It ran for only 52 performances and was not performed on Broadway again until 1953.

Recent tenants include Les Misérables, which in October 2006 began an intended six-month-long return engagement that finally closed in January 2008; and 2008 revivals of Cat on a Hot Tin Roof, with an all-African American cast including Terrence Howard, Anika Noni Rose, James Earl Jones, and Phylicia Rashad, and Equus, starring Daniel Radcliffe and Richard Griffiths. The theatre is also notable for hosting Jerry Seinfeld's final performance of his original stand up material, which was filmed for an HBO special shortly after the finale of his long-running sitcom. 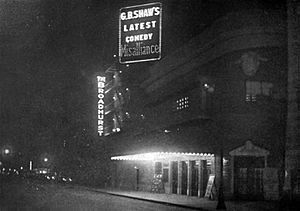 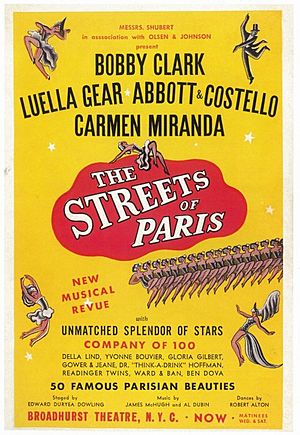 The Streets of Paris, premiered on June 19, 1939, at the Broadhurst Theatre, featuring Carmen Miranda to the American public. 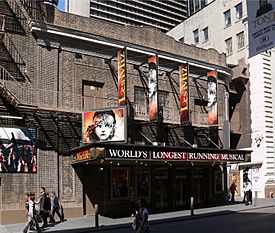 All content from Kiddle encyclopedia articles (including the article images and facts) can be freely used under Attribution-ShareAlike license, unless stated otherwise. Cite this article:
Broadhurst Theatre Facts for Kids. Kiddle Encyclopedia.