One Astor Plaza facts for kids 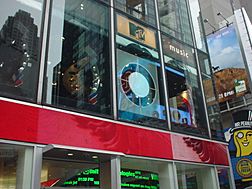 The set of Total Request Live in the Uptown Studio 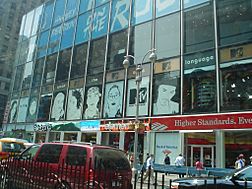 One Astor Plaza is a skyscraper located in the Times Square area of Midtown Manhattan, New York City. The building is 54 stories tall and stands at a height of 745 ft (227 m). It was designed by Der Scutt of Ely J. Kahn & Jacobs. It is located at 1515 Broadway between West 44th and 45th Streets and is currently the headquarters for ViacomCBS and houses the MTV Studios, Revlon, Fashion One, Minskoff Theatre, the former PlayStation Theater, and some retail outlets. The Hotel Astor had occupied the site from 1904 to 1967. Construction of the building began in 1968 and was completed in 1972. The building was the headquarters of the W. T. Grant retail chain, which leased almost 400,000 square feet (37,000 m2) of space on the building's top 14 floors, but only occupied it for four years until their 1976 liquidation.

It is owned and managed by SL Green Realty Corporation. The building engineers are Shmerykowsky Consulting Engineers.

The Minskoff is a Broadway theatre named after its developers, a prominent local real estate family. Accessible from the middle arcade in the center of the building, it opened in 1973 with 1,621 seats.

Astor Plaza houses MTV Studios, owned by ViacomCBS, the building's primary tenant, along with Revlon and Fashion One. The studios are located on the mezzanine second story of the building. MTV acquired it in 1997. It was initially split into three major studios all located by the floor-to-ceiling windows and window shades. The three studios were named after the three sections of Manhattan: the Uptown Studio, the Midtown Studio, and the Downtown Studio. They are named so because they are proportional to the real sections of Manhattan.

The Uptown Studio was home to MTV's former flagship program, Total Request Live, during the show's run from 1998 to 2008 along with MTV and VH1 and was later an Aéropostale store. The Midtown Studio is used by various MTV programming, MTV News, and was used by VH1's Big Morning Buzz Live, and on rare occasion Nickelodeon and Comedy Central. The smallest studio, the Downtown Studio, is occasionally used for other countdown shows, and productions from some of the smaller Viacom networks. It is occasionally used as a temporary green room if the actual green room is occupied. The MTV Studios also include dressing rooms, control rooms, a cafeteria, and some offices.

In 2020, CBS News began to occupy the MTV Studios space, initially converting it into a studio for its coverage of the 2020 presidential election. In December 2020 following the election, it was reported that CBS was considering re-locating its morning show CBS This Morning from the CBS Broadcast Center to the space (joining its rival Good Morning America in broadcasting from Times Square).

The Loews Astor Plaza movie theater originally occupied the building's public space below street level, accessible from West 44th St. It opened on June 26, 1974, and was the city's largest capacity cinema at 1,440 seats. The theater's single screen often drew large crowds on opening nights until it closed in 2004.

After a nine-month, $21 million renovation, the space reopened as a music venue under the ownership of Anschutz Entertainment Group, most recently known as PlayStation Theater (formerly Nokia Theatre Times Square and Best Buy Theater). The PlayStation Theater closed on December 31, 2019.

On the evening of May 1, 2010, a failed car bomb was defused by the New York City Police Department on West 45th Street and Broadway near the northeastern corner of the building. The authorities briefly investigated a possible connection between the bomb and the 200th episode of Comedy Central's South Park, which had included depictions of a man in a bear suit (labeled 'Bears') that the South Park kids pointed at, calling him Muhammad. The attempt was traced to Faisal Shahzad, a 30-year-old Pakistan-born resident of Bridgeport, Connecticut, who had become a U.S. citizen in April 2009.

All content from Kiddle encyclopedia articles (including the article images and facts) can be freely used under Attribution-ShareAlike license, unless stated otherwise. Cite this article:
One Astor Plaza Facts for Kids. Kiddle Encyclopedia.